Last year Rick Perry was indicted by a Grand Jury in Texas on criminal charges of abuse of power. The charges stemmed from his attempt to unlawfully coerce an elected District Attorney into resigning. Today this alleged felon announced that he is running for the Republican nomination for president of the United States. Isn’t that cute? What follows is the News Corpse article detailing the case against Perry and the efforts by right-wing media to dismiss it.

[August 17, 2014] Ever since a Texas Grand Jury handed down an indictment against Gov. Rick Perry, most of the Republican establishment and right-wing press have deliberately mischaracterized the nature of the criminal allegations. They all are marching lock-step in an effort to defend official abuse of power by pretending that the violation was due to the execution of a veto, something that is entirely permissable by a governor in Texas. 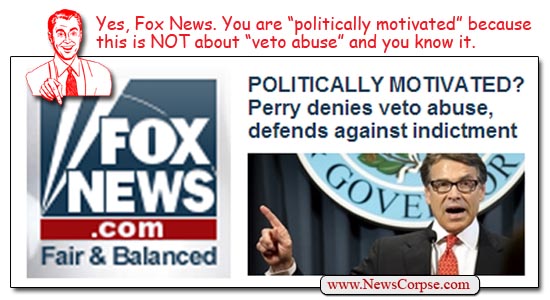 The problem with their defense of Perry, which he has adopted himself, is that the indictment is not for his having issued a veto. It is for his having threatened an elected public servant in an attempt to coerce her to resign.

Rosemary Lehmberg, the District Attorney for Travis County, has problems of her own. She was arrested and pleaded guilty to driving while intoxicated and behaved poorly during the arrest and initial incarceration. However, a Grand Jury investigated her situation at the time and found no cause to indict her for official misconduct.. Indeed, her misconduct, while egregious, was all personal and unrelated to her duties as a D.A. All of her misbehavior occurred while she was drunk, and when she sobered up she took responsibility, paid her price to society, and promised not to run for reelection.

That wasn’t good enough for Perry. He demanded that she resign immediately and threatened political vengeance if she refused to obey his command. Lehmberg stood fast and Perry carried out his retribution by slashing funds to her department. And that is where he went wrong.

Perry defended himself against the indictment by saying that he has the authority under the Texas constitution to issue vetoes. And in this case he was taking action because he had lost confidence in Lehmberg and that the public deserved better. Perhaps. But that is not within his jurisdiction to decide. Lehmberg was elected to her office by the voters of Travis County and does not answer to the Governor. Perry has no authority to demand the removal of elected officials or to exact retribution on them if they defy his orders. Perry’s own remarks following the indictment reveal the flaw in this line of defense. He said that indictments are…

“…not the way we settle political differences in this country. We settle [them] at the ballot box.”

Exactly (and he may want to relay that message to John Boehner). And since Lehmberg had already pledged not to run, the issue was settled. Perry cannot unilaterally overturn the choice of the voters. And he cannot threaten elected officials as a means of carrying out his unlawful bullying. By vetoing the funds to the D.A.’s Public Integrity Unit, Perry was attempting to force his will on Lehmberg. Even worse, he was actually doing harm to the people of Texas who rely on that agency to keep politicians (like Perry) from engaging in corruption.

Perry’s fate will rest on a jury’s decision of whether or not he exceeded his authority in threatening Lehmberg to resign, not on the veto he used as his muscle. In the meantime, the media is also on trial, and when Fox News and others misrepresent the facts in order to whitewash the crime, they must be judged guilty as well.

Perry is going to have some trouble gaining any traction after his latest humiliating campaign. But truth be told, he’s a pretty good standard bearer for the Republican Party. He’s an evangelical wingnut with criminal tendencies who gets his snake oil straight from the well.