For anyone looking for additional evidence that Fox News makes people stupid, another splendid example popped up on the Fox Nation website today. 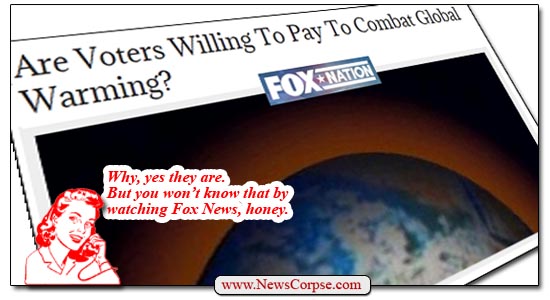 The article’s headline posed the question “Are Voters Willing To Pay To Combat Global Warming?” Both the question and the original source for the article came directly from the ultra-conservative pollsters at Rasmussen Reports. The folks at Rasmussen answered the question by stating flatly that “Most voters still aren’t ready to pay much, if anything, to fight global warming.” Fox News repeated the same thing without any critical assessment of its accuracy.

It would not be surprising, then, for Fox’s audience to come away believing that the poll showed that Americans are unwilling to pay up in order to prevent the scientifically verified dangers of Climate Change. And if they won’t pay to mitigate the harm, then they must not think it’s very important.

The problem with that conclusion, however, is that it flies in the face of both reality and the actual results of the Rasmussen poll. Reading further on the Rasmussen article (which Fox did not report) reveals a very different representation of the public opinion:

“A new Rasmussen Reports national telephone survey finds that 41% of Likely U.S. Voters say they are willing to pay nothing more in higher taxes and utility costs annually to to generate cleaner energy and fight global warming. But that’s down from 48% last August and the lowest level measured in regular tracking since January 2013. Another 24% are willing to spend only $100 more per year, unchanged from earlier surveys. Twenty-six percent (26%) are ready to spend $300 or more a year to combat global warming, with six percent (6%) who are ready to spend at least $1,000 more annually.”

So how did they arrive at that obviously contrary conclusion? One guess is that they simply decided that either $100.00 or $300.00 is not “much” money. But that’s a subjective analysis and many Americans would dispute it. Even Fox News would dispute it under different circumstances. For instance, if they thought that someone’s health insurance premium was going to increase $100.00 per year they would regard it as an outrage and renew their calls to repeal ObamaCare.

Another possible explanation for how the poll results were so absurdly twisted is Rasmussen’s methodology wherein they split the responses into four groups (pay nothing, $100.00, $300.00, or $1000.00). The effect is to divide all the responses where there is willingness to pay into three answers, while leaving a single answer for those unwilling to pay anything. Consequently, you get a plurality of 41% who won’t pay, compared to smaller numbers who will pay different amounts. So long as no one adds up those other amounts and realizes that they total 56%, a deceptive pollster could claim that those who won’t pay are the largest single group.

Rest assured that the Fox News audience won’t do the math. In fact, they probably won’t even click through to read the article. And for the foreseeable future they will believe, falsely, that the majority of the American people are against any attempt to address Climate Change if it is going to cost them anything. Nice work Fox. Your dishonesty will keep your audience mired in ignorance, just the way you like them.