You are traveling through another dimension, a dimension not only of sight and sound but of mind. A journey into a wondrous land whose boundaries are that of imagination. Your next stop, the InfoWars Interview. 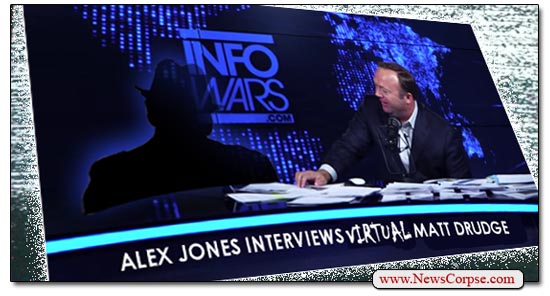 On Tuesday’s episode of InfoWars (video below), host and the conspiracy theory’s chief theoretical conspirator, Alex Jones, almost invited yellow pseudo-journalist Matt Drudge to join him in a discussion of the current state of the world of the deranged. I say almost because the interview began with Jones announcing that his teen crush Drudge was in the studio, but that he would not appear on camera (for fear of losing his soul?).

Jones: I did not do this as a stunt. Neither did Matt Drudge. He is here. We got a hot mic over there. He wants to stay literally in the shadows behind the curtain.

So in this version of the Wiz, the great and powerful Drudge commands that you do pay attention to the man behind the curtain. In a bizarre bit of Burlesque theater, Jones conducted the whole interview with Drudge allegedly a few feet away, out of camera range. There was never an explanation for why Drudge refused to be seen. He isn’t exactly camera shy as he once hosted his own TV show (on Fox News of course). What could be more perfect for the conspiratorial set than for a reclusive disseminator of rightist propaganda to lurk off-camera and send his disembodied voice across the webosphere in a dialog with a sociopathic skeptic? What self-respecting minion of Alex Jones would believe that Drudge was really there at all? Wake up, sheeple!

As a testimonial to the fabulousness of this chin-flapping, Sarah Palin tweeted that this is “One of the best interviews I’ve heard in a long time!” And why not? The pair spent much of their forty-six minute “bull” session congratulating each other on their bravery for standing up to some unseen oppressor who has shackled them to a dreary existence as mere multimillionaires with legions of glassy-eyed disciples. The horror! Although there were a couple of subjects that were examined in a fair amount of detail that deserve attention.

First of all, Drudge dredged up the obsession that kicked off his career twenty years ago: Hillary Clinton. Apparently he is still enthralled with her terrifying omnipotence and simultaneous impotence. Here is an abridged summary of his rambling and incoherent remarks about his Wicked Witch of the White House:

Drudge: How sick are the American people right now? They could put Hillary Clinton’s brain in a jar in the Oval Office and she’d be elected. People are really sick. […] Before this country is so completely altered and we’re left with Hillary’s brain in the Oval Office in a jar – ‘cuz that’s what we’re getting. She is old and she’s sick. She is not a contender. They’re making her a contender with these propped up Saturday Night Live things. It’s like a head on a stick. […] I’m very pessimistic on this race because I’m just not so sure it’s not gonna end up with the dreaded brain in the jar in the Oval Office, once known as Hillary Clinton – who is hypo-thyroid. Anybody who is seventy years old who’s hypo-thyroid you do not elect president, ladies and gentlemen. You don’t do it. […] Why aren’t we seeing Hillary’s lovers? Excuse me? Why aren’t we seeing Hillary’s lovers? Where’s the cover-up on this?

The only question arising from that schizoid rant is whether Drudge is on too many psychotropic drugs or too few. Either way he needs some serious medical attention. He is particularly disturbed by the thought of a jar of brains, which may be attributable to simple jealousy that Clinton has something that he and his wingnut cohorts can only dream about.

The other subject that received considerable scrutiny was a paranoid diversion into acute crackpottery. Abandoning any pretense of reality, Drudge unveiled a historical account of the legend of ISIS that would make J.K. Rowling blush with embarrassment.

Drudge: We never really heard of ISIS until recently and I remember when that name first started coming up. Do you know that it was designed to be confused with Darrell Issa? Did you know that’s what it was. Because Darrell Issa was the enemy at the time of this administration. […] They came up with the name ISIS to be confused with Darrell Issa. I’m really being hinest with you. I remember the first time Christiane Amanpour sputtered out this word ISIS thinking did she get that one? […] And then the President going it’s not even ISIS, it’s ISIL or IS. This Dr. Seuss. This is madness.

Obviously. How could we have missed it before? Barack “Svengali” Obama invented the acronym ISIS (Islamic State of Syria and Iraq) and somehow got the terrorists to use it to refer to themselves. But in a bit of brilliant strategic jujitsu, Obama himself sidestepped it in favor of ISIL, which doesn’t sound as much like Issa, but still has an “I” and an “S” in it, preserving the theory’s tenuous plausibility.

It is inspired analysis like this that has made Matt Drudge an icon in conservative media. And his reputation among rightists and Teabaggers will only be enhanced by this eccentric display of lunacy. It perfectly reflects Drudge’s own plaintive question: “Where are the flamboyant characters? This is what America needs right now – flamboyant, intellectual characters.” By entering the lair of professional whack-job Alex Jones, and establishing the natural affinity between the two fringe constituencies, Drudge and Jones have not only answered that question, but they have advanced the level of idiocy that will be forthcoming from the right, as well as the level of laughter from the left.

10 thoughts on “Alex Jones And Matt Drudge: The Most Bizarre Interview You Will Ever Imagine You Witnessed”