FrontPage Mag, the online organ of David Horowitz’s right-wing Freedom Center, regularly publishes virulently anti-Muslim screeds intended to spread disinformation and fear. Horowitz is a radical rightist who has been called “the godfather of the modern anti-Muslim movement” by the Southern Poverty Law Center. His organization is a fringe assembly of wingnuts that is tied to notorious Islamophobes like Pamela Gellar and Daniel Pipes. And that makes it a perfect source for the bigots at Fox Nation.

Seeking to shore up Donald Trump’s widely lambasted proposal to ban all Muslims from entering the United States, FrontPage reached back thirty-five years to post an article titled “Jimmy Carter Banned Iranians from Coming to the U.S. During the Hostage Crisis.” The apparent purpose is to exonerate Trump by suggesting that Carter did the same thing. There’s just one little problem: It isn’t the same thing at all. 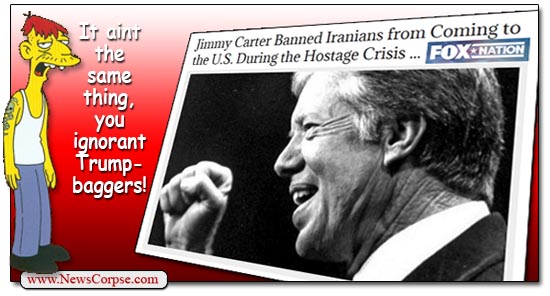 It takes a deliberately obtuse individual to find any similarity between what President Carter did when Americans were being held captive in Iran, and what Trump is proposing now. Iran is a sovereign nation with an identifiable and accessible governing body. In 1979, in what became known as the Iranian Hostage Crisis, students, with the support of the government, took over the American embassy in Tehran and held fifty-two diplomats hostage. Responding to that act of terrorism, Carter implemented a series of sanctions against the nation of Iran to pressure them to release the hostages.

Among the measures taken by Carter was the breaking off of diplomatic relations, suspension of trade, freezing financial assets, and this one that was included in the FrontPage article to vindicate Trump:

“Invalidate all visas issued to Iranian citizens for future entry into the United States, effective today. We will not reissue visas, nor will we issue new visas, except for compelling and proven humanitarian reasons or where the national interest of our own country requires.”

That is what FrontPage and the Fox Nationalists think is comparable to Trump’s desire to prohibit all Muslims, from all nations, from entering the U.S. based on their religion. Carter was imposing sanctions on the citizens of a country that was unlawfully detaining Americans. That is a reasonable reaction to an act of aggression by sovereign state. It is how diplomacy is conducted in order to pressure an antagonistic country into complying with international law.

Trump, on the other hand, is advocating a ban on all individuals of a particular faith. They may have nothing to do with any other nation or entity that is in conflict with the U.S. They may, in fact, be supporters of the U.S. who seek to travel here in order to help in the fight against terrorism. They may be doctors or scientists or teachers who cherish Western freedoms. They may be diplomats or politicians from Canada or Italy or Indonesia. They may be relatives of American Muslims who simply want to visit or reunite with their families. The one identifying characteristic prohibiting them from entry under Trump’s proposal is their religion.

That sort of religious bigotry is antithetical to everything for which America stands. It violates the very principles that inspired the first Europeans to venture to a New World. And, unlike the sanctions imposed by Carter, there is no discernible benefit that could be derived from imposing it. Nevertheless, here is the nearly incoherent argument offered by FrontPage:

“Now unlike Muslims, Iranians were not necessarily supportive of Islamic terrorism. Many were and are opponents of it. Khomeini didn’t represent Iran as a country, but his Islamist allies. So Trump’s proposal is far more legitimate than Carter’s action. Carter targeted people by nationality. Trump’s proposal does so by ideology. […] Classifying Iranians as a group is closer to racism than classifying people by a racist supremacist ideology that calls for the mass murder and enslavement of non-Muslims, as ISIS is doing today.”

To set the bar for idiocy as low as possible, the very first sentence of their argument implies that all Muslims are “supportive of Islamic terrorism.” They go on to make the absurd contention that “Khomeini didn’t represent Iran as a country.” WTF? And based on those ludicrous assertions, they conclude that Trump’s proposal is “far more legitimate than Carter’s.” This is literally too stupid to respond to.

But they aren’t done embarrassing themselves. The next half-baked notion they float is that targeting citizens of a nation with which you are in conflict is racist, which by definition, it is not. At the same time they dismiss that notion that targeting people by religion is racist, which by definition it is. And they close by again implying that all Muslims practice the sort of perversion of Islam that is practiced by ISIS.

This is the sort of garbage “journalism” that Fox News has chosen to pluck out of the hate mongering fringe in order to defend Donald Trump. That tells you just how desperate they are to maintain their appeal to Trump’s bigoted supporters. It is a marriage made in hell that only furthers the interests of America’s enemies.