One of the most bizarre tangents in the 2012 election was the effort to spin all the polls showing President Obama ahead as deliberately distorted by a vast conspiracy of nefarious pollsters. They set about to “unskew the polls” through various methods of mathematical mischief. But all they ended up doing was creating a false impression of Obama’s weakness that left them shocked by his eventual landslide victory. And that willful self-deception is still in play today. 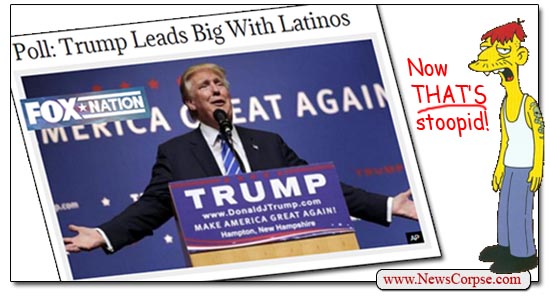 Over at Fox Nation, the Fox News community website, they are featuring an article with the dubious headline “Poll: Trump Leads Big With Latinos.” However, there are a few details about this assertion that Trump is leading big (or as Trump would say, “bigly”) that have been left out.

The Fox Nation item linked to an article in The Daily Beast by conservative columnist Ruben Navarrette, Jr., that opened with a pertinent fact that the Fox Nationalists omitted from their headline. The Latinos in the poll were not from the population at large, but were exclusively Republicans. So whatever lead is alleged has to be put into the context that most Latinos (about 75%) are Democrats and, therefore, are not represented in this poll. The remainder of the article sought to explain why the premise of Latinos supporting Trump was not insane.

The most important of the omissions, however, was the fact that the poll was conducted on behalf of the ultra-conservative American Federation for Children. This benignly-named organization, according to Source Watch, is “a conservative 501(c)(4) advocacy group that promotes the school privatization agenda via the American Legislative Exchange Council (ALEC) and other avenues.” And ALEC is closely associated with the Koch brothers. So right off the bat the integrity of this poll should be brought into question but, of course, it was not. In fact, the poll was distributed throughout the right-wing-echo chamber to outlets like the New York Post and Breitbart News.

In addition to the the poll’s partisan scope of respondents, the sample size of Latinos was hardly sufficient to draw any accurate conclusions. The folks at Latino Rebels drilled down into the polling data and discovered how weak the case is for the claim that Trump is popular among Latino voters. The sample size was so small that it took only 21 respondents to produce the 38% allegedly favoring Trump. A reputable pollster would decline to release the results of such a thinly supported survey.

This is reminiscent of another poll recently touted by Trump that claimed that “Minorities Line Up Behind Donald Trump.” In that laughably useless poll there were just four respondents that made up Trump’s 40% advantage (that’s 4 out of 10). So this new poll actually improves on that abject silliness to become merely ordinary silliness.

The Republican Party knows that they have to attract more Latino votes, as they noted in their post-2012 “autopsy.” But they still aren’t demonstrating that they have any idea how to do that while maintaining a thoroughly anti-Latino agenda. The RNC has banned the biggest Latino news network, Univision, from hosting any GOP debates, and Trump said that he would nix Telemundo (which is currently scheduled to co-sponsor an upcoming debate with CNN). And despite all of this Trump still insists that he will win the Latino vote, and the African-American vote too. Yeah, sure he will.