Todd Starnes is the resident Fox News televangelist and Christaria Law proponent. As the host of Fox’s American Dispatch he devotes nearly every segment to some perceived blasphemy on the part of government, schools, or businesses. He is convinced that the huge majority of American Christians are being oppressed and are at risk of losing all of their rights. He sees conspiracies in popular culture to rob good Christians of rewards to which they are entitled. And he preaches a twisted gospel that casts Jesus as an ass-kicking warrior. 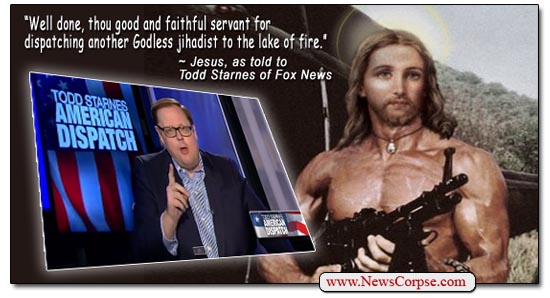 The latest episode of the Starnes Stories concerns a photo that was posted on Facebook showing a high school kid standing on an American flag. The story came from the Education Action Group, a right-wing organization that is funded by the Koch brothers and has a rotten record for honesty. Starnes posted an article on Fox News reporting that “Teen’s flag-stomp stunt at HS spurs investigation.” That act of disrespect was castigated as “repulsive” and “detestable” by Starnes. In his highly biased presentation of the facts he said that…

“The repulsive photograph, reportedly posted online over the Valentine’s Day weekend, shows a young man standing on Old Glory as a female student stands nearby with her middle finger raised.”

Setting aside that fact that there was nothing to investigate, the incident would have been forgotten had it stopped there. It would have been nothing more than an ordinary expression of opinion, to which Starnes is entitled. However, the article went on to hail the school administration for coming out strongly against this student’s extracurricular activity.

“The district solicitor posted a message online promising a ‘timely and thorough review of this incident and will implement appropriate legal discipline.’ They called the photo ‘unfortunate and unpatriotic.'”

Starnes was thrilled that there would be legal consequences for the student’s outrageous behavior. The only problem is, he didn’t break any law. The Supreme Court has ruled that the flag can be used as an instrument of expression. Despite the hurt feelings of patriopathic zealots, it would be unlawful to constrain speech merely because it involved the flag. According to Starnes, however, this treasonous tot should be forced to undergo some sort of punishment. And when the ACLU was asked to comment on the affair, their answer only enraged Starnes further. He wrote that…

‘As long as they were trying to send a message of protest, it sounds like they are protected to me,’ legal director Witold Walczak told the Tribune Democrat.

“The ACLU enjoys nothing better than an old-fashioned American flag burning.”

Actually, the ACLU enjoys nothing better than old-fashioned freedom of speech. And as has been observed in events like this since the founding of the nation, it is primarily speech that some people find offensive that is most in need of protection. After all, no one is trying to censor speech that everyone likes. 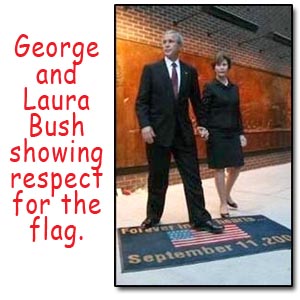 In addition to Starnes demonstrating an aversion to the First Amendment, he is also affirming the blatant hypocrisy of conservatives like himself on Fox News and elsewhere. For some reason he never bothered to complain when George W. Bush and his wife Laura stomped on an American flag. Nor did it disturb his tender sensitivities when Fox News paid tribute to flag desecration on the 4th of July. And while putting Obama’s face on flag was considered a disgrace, there was no such anger when the Tea Party did it. Clearly flag desecration is permitted when the offender is a conservative, but reviled otherwise.

Starnes has developed a reputation as a dishonest purveyor of religious propaganda. That’s surely how he got his job at Fox News. One particularly grievous example of his lack of principles was the time he reported on a five year old girl whose father claimed she was prohibited from praying in her school’s cafeteria. There was never any evidence that this happened and it was later discovered that the girl’s father was the VP of Sales for his publisher (which he never disclosed) and he had a book that was just about to be released on this very subject. The whole thing was apparently a lie concocted to sell his book. And that’s not an uncommon modus operandi at Fox News where virtually every anchor is hawking their books.