On Good Morning America today host George Stephanopoulos interviewed Donald Trump and raised the subject of the increasingly common comparisons of him to Adolf Hitler. This, in and of itself, isn’t new, but Trump’s response added another lie to the growing collection of falsehoods that he has accumulated (see the Trump Bullshitopedia).

Stephanopouplos didn’t go into much detail about the many similarities of Trump’s rhetoric to that of the Nazi leader, but he did note that critics as diverse as comedian Louis CK, and the unintentionally funny crackpot Glenn Beck, have both made the association. Then Stephanopoulos hit Trump with a fact that has become inescapable, saying that “The number of prominent people comparing you to Adolf Hitler is growing by the day.” Trump responded saying…

“I don’t know about the Hitler comparison. I hadn’t heard that, but it’s a terrible comparison. I’m not happy about that, certainly. I don’t want that comparison. But we have to be strong.”

Setting aside the perverse argument that being strong is somehow a defense for sounding like a fascist, Trump is flat out lying about not having heard the Hitler comparisons before. In fact, Trump heard these very same comparisons while being interviewed by the very same guy. Last December News Corpse reported on an exchange between Trump and Stephanopoulos that was nearly identical to the one today. The only notable difference is that today Trump feigned being unhappy with the comparison, while previously he said that it didn’t bother him. From News Corpse, Dec. 8, 2015:

It had to come to this. Donald Trump’s affinity for Nazis was always just beneath the diseased skin of his repulsive rhetoric. Now, after months of promulgating brazenly racist views, advocating policies that are indistinguishable from those of history’s fascists, and promising to commit war crimes if elected, will anybody be surprised by it bubbling to the surface? Trump’s true face was exposed today when he was asked a simple question on Good Morning America:

George Stephanopoulos: You’re increasingly compared to Hitler. Does that bother you?
Donald Trump: No, what I’m doing is no different from FDR. 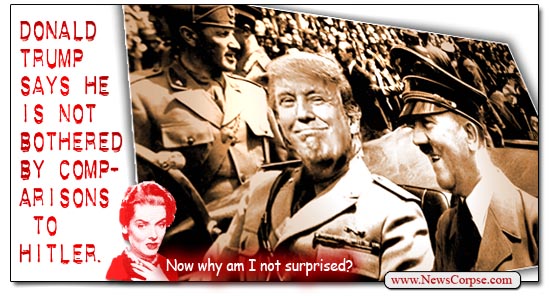 So there you have it. Donald Trump is not bothered by comparisons to Adolf Hitler. And why should he be? He has been running on the platform of the Nazi Party since he announced his candidacy. What’s more, he justifies his comfort with the association by positively referencing the Japanese internment camps built during the FDR administration, which are universally condemned as one of America’s most shameful actions.

Trump frequently claims that he has “the greatest memory in the world,” but he is now pretending not to recall a recent discussion with the same interviewer on the same subject. Trump’s dishonesty is becoming so flagrant that he is having trouble keeping track of his previous lies. And his pretense that he is suddenly bothered by being associated with a megalomaniacal tyrant is hardly believable. His most recent rallies have been marred by violence that he openly encourages against protesters. He even promises to pay for the legal defense of anyone who assaults a protester. He has hired his own brand of brownshirts to patrol his rallies. And the loyalty pledge ceremonies that he orchestrates eerily resemble the throngs of Germans hailing Hitler with the Nazi salute.

So when you hear Trump claim that he is unaware of the comparisons to Hitler, you now know that it is a blatant lie. You also know that when he complains about that comparison, it is obvious that he is simply trying to deny the reality that his entire campaign is grounded in fascistic rhetoric, and worse, behavior. And as bad as it is that Trump would engage in such a repulsive campaign, we must not forget the people that attend his rallies cheering, pledging loyalty, beating protesters, and later voting for this nauseating candidate. It is what the Republican Party has sunk to in this age of rightist hate.

4 thoughts on “Mein Drumpf: Comparisons To Hitler Should Not Surprise Donald Trump”