The debate over the causes of the Orlando massacre last week have run the gamut from radical Islamic terrorism, to the availability of military-style assault weapons, to violent homophobic extremism. The reality from the available facts is that there are elements of all three contributing to the madness of the shooter. But the media isn’t helping matters when they introduce absurdities into their analysis that blatantly contradict the truth. 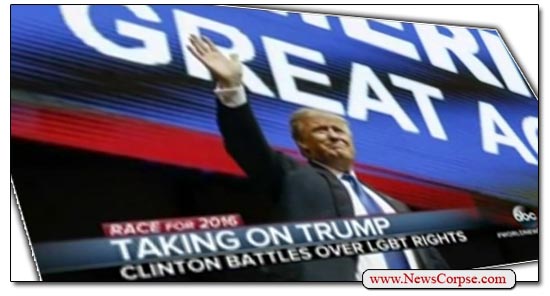 Yesterday on ABC News (video below), their Chief White House Correspondent, Jonathan Karl, promoted Donald Trump’s delusional pronouncement that “LGBT is starting to like Donald Trump very much lately. I will tell you.” Neither Trump nor Karl offered any evidence of that, and polling shows that Trump has a dismal favorability rating with LGBT people of only 18 percent. By contrast, Hillary Clinton is viewed favorably by 54 percent of the LGBT community.

Nevertheless, Karl continued to hype Trump’s stumping on the issue by running clips of Trump criticizing Clinton for accepting donations to the charitable Clinton Foundation from Saudi Arabia or other countries with poor records on human rights for gays and women. But both Trump and Karl neglected to put that claim in context by disclosing that Trump has many business relationships with people and businesses in the same countries that are not charitable in the least, but from which he will personally profit.

Karl closes the segment with a conclusion that can only be described as deranged. He said that…

“When it comes to gay rights, it’s Hillary Clinton who supports gay marriage, not Donald Trump. But even so, there is little doubt, David, that Trump is the most pro gay rights Republican presidential candidate that we have ever seen.”

WTF? Donald Trump cannot be portrayed as pro-gay rights by any stretch of the imagination. He has a long history of insulting remarks and hostile positions aimed at the LGBT community. He has publicly committed to appointing Supreme Court Justices who would overturn marriage equality. He has promised to sign the First Amendment Defense Act, which codifies discrimination against gays in commerce, employment, and housing. He meets with, and panders to, anti-gay hate groups like the Family Research Council. His solicitous embrace of anti-gay, evangelical extremists has been a core strategy of his campaign.

Karl might have been on firmer ground if he had merely suggested that Trump was less anti-gay than other Republicans who blame them for natural disasters and advocate stoning them to death. But only slightly firmer since many of Trump’s friends and allies (i.e. Jerry Falwell, Jr., Tony Perkins, and Alex Jones) proudly hold those views. But to put the words “pro” and “gay” in the same sentence as “Donald Trump” is a deliberate bastardization of the political reality that defines him. It is also a breach of journalistic principles that require adherence to honest representations of news events and figures.

Donald Trump’s cynical play for support from people whom he openly seeks to harm is a sinkhole of lies that no one should be so naive as to fall into. And it’s particularly reprehensible that he is using the tragedy in Orlando to fish for votes among people still in shock over what happened. Karl’s reporting on Trump only makes things worse by his failure to live up to his professional obligation to inform the public with facts and reason and coherent analysis. Karl failed miserably on all three counts.