Donald Trump has been fighting a bloody “War on the Media” for months now. His recent escalations included calling the “fake news” media the “enemy of the American people.” Shortly thereafter his press secretary, Sean Spicer, banned several news organizations from a White House briefing. The animosity from Trump gets more intense by the hour. 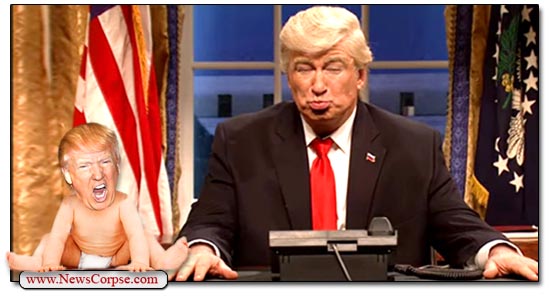 In his latest assault Gen. Trump has just announced that he will not be attending the White House Correspondents Dinner on April 29. The WHCD is an annual affair that is held to raise funds for scholarships. But apparently Trump’s anti-media obsession overrules any interest in helping a charity.

The truth is more likely that Trump is afraid of having a close encounter with the “enemy.” He has never been particularly good at laughing at himself. That’s a personality flaw that’s common among narcissists. So rather than fraternize with the media he so fervently hates, and being the butt of their jokes, he canceled.

What’s more, the presidential guest of honor is expected to perform his own comedy bit. Just imagine how hard he would fall on his orange, spray-tanned face if he was pressed into that situation. Actually, you don’t have to image it. He painfully bombed when he was asked to tell a few jokes at the Al Smith Memorial Foundation Dinner last October (video below). Guests at that event noted that, for the first time ever, the speaker was booed.

With Trump’s cancellation, this will be the first dinner in thirty years where a president was not in attendance. The last president to miss the dinner was Ronald Reagan. But he a darn good excuse. He was recovering from having been shot. Yet he still phoned in a joke. “If I could give you just one little bit of advice,” he said, “When somebody tells you to get in a car quick, do it.”

This may all be for the best. After all, polls show that the public overwhelming prefers the media to Trump. So the event could benefit by his absence. Parties who have been planning to bow out this year may change their minds and show up. Ratings for the TV broadcast could soar. And it might even help by increasing donations.

Additionally, the WHCA could send invites to Barack Obama or Hillary Clinton if they want some fire power on stage. Plus they could enlist an alternative Trump to sit on the dais. Something tells me Alec Baldwin would be available. And no doubt Trump himself would be home watching and tweeting about how horrible it is. SAD!