Just when you thought this election couldn’t get any more bizarre, it smacks you right in the funny bone. Thursday night Donald Trump and Hillary Clinton met again on stage at the 71st Alfred E. Smith Memorial Foundation Dinner. [Full video below] It’s an annual event hosted by the Catholic Archdiocese of New York. During presidential election years it brings together the two major party candidates for a night of friendly roasting. 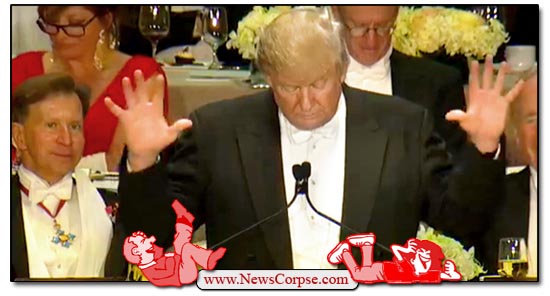 However, as with everything else this year, it was a different sort of affair. As might be expected, Donald Trump’s sour personality made it difficult for him to project the human quality of humor. He delivered his remarks while looking down at his speech nearly the whole time. It seemed as if he had never even read it before coming to the podium. His delivery was stilted and he stumbled with the pronunciation of common words. His attempts at self-deprecating jokes were mostly just whining.

Trump began with some stale material that even he admitted was corny. His initial jokes involved the size of his hands and his feud with Rosie O’Donnell. The biggest laugh he received was for a line about the speech his wife Melania gave at the Republican convention. Actually, it was a pretty good line:

“Michelle Obama gives a speech and everyone loves it. They think she’s absolutely great. My wife Melania gives the exact same speech and people get on her case. And I don’t get it. I don’t know why.”

But it’s all downhill from there. For the remainder of the routine Trump descends into the bitterness that is emblematic of his standard stump speeches. The audience, mainly wealthy New York elites and Catholic church VIPs, were not impressed. In fact, for what many are saying is the first time ever, they booed the speaker – repeatedly. And this was Trump’s crowd. Here are some choice excerpts:

“We’ve learned so much from WikiLeaks. For instance, Hillary believes that it’s vital to deceive the people by having one public policy and a totally different policy in private.”

How do these “jokes” differ from his regular daily insults? No wonder he was booed. Demonstrating his utter inability to grasp the audience reaction, Trump asked in an aside “I don’t know who they’re angry at, Hillary. You or I.” We’ll give you two guesses, Donnie. Then he continued by stomping on the hosts:

“Here she is tonight in public pretending not to hate Catholics.”

But the single most awkward moment was when Trump made light of a human tragedy. That is something that any experienced comedian, or any public speaker, will tell you is off limits. Most people find it difficult to laugh at situations where thousands died and many more are still suffering:

“Everyone knows, of course, Hillary’s belief that ‘it takes a village.’ Which only makes sense, after all, in places like Haiti where she’s taken a number of them.”

Even the event’s host, Alfred E. Smith IV, recognized that Trump had misfired. He said the following day that Trump’s joke about Clinton “pretending not to hate Catholics” did not sit well with the largely Catholic audience. Furthermore, he said that:

“Donald had some very solid minutes early on and eventually he crossed the line and took it a little too far. Hillary, on the other hand, was able to laugh at herself and at the same time not underplay any of the serious things that Donald Trump has said or done.”

Speaking of Hillary, she did indeed have a much better night. Her jokes were well received despite Trump having poisoned the room. She spread her topics out to cover herself, Trump, the campaign, and many of the attendees. But perhaps her most potent shot at Trump was not aimed directly at him at all. In her more serious closing remarks, Clinton addressed some basic beliefs that one could not ignore as having an association with the campaign. She condemned the “appeals to fear and division [that] can cause us to treat each other as ‘the other.'” She also praised Pope Francis and his message:

“…of rejecting a mindset of hostility; his call to reduce inequality; his warning about climate change; his appeal that we build bridges not walls.”

Clinton closed by saying that:

I believe that for each of us, our greatest monument on this earth won’t be what we build, but the lives we touch.”

Condemning appeals to fear and division. Rejecting hostility. Building bridges not walls. What a clever way of highlighting precisely what makes Trump so abhorrent while exhorting the principles of her hosts. Clinton deftly noted that it is personal legacies that endure. Not giant golden testaments to ego that are plastered onto skyscrapers. And with that she illustrated the differences between her candidacy and Trump’s. Or more broadly, between humanity’s aspirations and Trump’s.