One of the favorite stunts that conservatives use to try to shame liberals is the “man on the street” interview. Generally they purposefully skew the presentation to reflect their preconceived prejudices. Any responses that fail to advance their point of view are left on the editing room floor. Then they release a video with six people who agree with them, but never tell viewers that there were sixteen others who disagreed but were cut out. 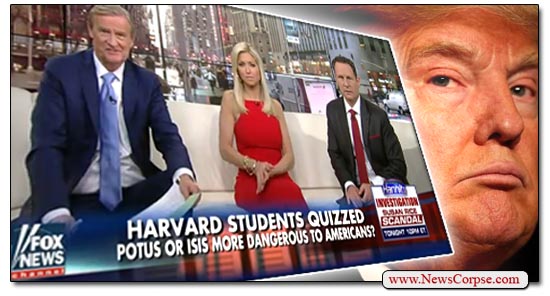 This week on Fox and Friends they featured a “reporter,” Cabot Phillips, from the ultra right-wing organization Campus Reform. He visited Harvard University in an effort to expose the alleged liberalism of the students and faculty. The question he asked was “Who is more dangerous to Americans, Donald Trump or ISIS?” Of course, he fully expected to find students who selected Trump, whom he would then try to make look foolish.

Surprise! He found just what he expected. Then, after showing the video (posted below) on Fox News, Phillips sought to explain what could possibly cause these students to have such radical and shocking opinions. He said that:

“It’s from President Obama, who they all look up to. Who for so many years said, “Well, ISIS is the J.V. team. They’re not this real threat. And also it’s from professors and the media who are again constantly saying “Look, Donald Trump is the real threat here,” and trying to shield their eyes from actual threats.”

That analysis was wholly constructed from his over-active imagination. Nowhere in the video did any student attribute their views to either Obama or their professors. And Phillips didn’t bother to interview any of the faculty to ascertain their views. What’s more, while Obama did once try to marginalize ISIS as a J.V. team, he also spent years outlining precisely the peril they pose. More importantly, he attacked them relentlessly, killing thousands of their operatives, including many of their leaders.

However, what was most conspicuous about the video was the fact that the students who said Trump was more dangerous had good reasons for thinking so. One of the students spelled it out saying that:

“Do I think ISIS is going to cause a threat to me living my everyday life? Not really. Do I think the rhetoric that Donald Trump is using and empowering these folks hidden in a corner for a long time with hateful views … do I think that’s more of a threat than ISIS? Yes.”

Indeed, Trump has done more for hate groups in America who espouse prejudice and violence than any President before him. It is not coincidental that the KKK and white supremacists uniformly endorsed Trump and worked to get him elected. Trump’s rhetoric during his campaign and presidency has encouraged America’s bigots and increased the number of hate crimes. African-Americans, gays, Muslims, Latinos, and Jews have all been victimized in greater numbers in the Era of Trump.

The harassment and assaults that Trump has inspired have a much more direct impact on the safety of Americans. That doesn’t diminish the horror of terrorist activity by ISIS. It’s just a fact. It is not, therefore, the least bit surprising that people consider Trump more to be dangerous with respect to their personal lives.

Not mentioned in this video were risks posed by Trump’s actual policies. The president’s erratic behavior makes him a poor choice to be in charge of the nuclear codes. And his anti-environment stance could result in millions of lives lost due to famine, drought, extreme weather events and war.

Taking a logical approach to the question, it’s clear that Trump is potentially far more dangerous to America and the world than ISIS. He commands a much bigger military with far greater resources. The video is a blatantly partisan sham by conservative activists. Campus Reform is a project of the uber-rightist Leadership Institute that receives much of their funding from the Koch brothers. Their alumni includes hacks like Mitch McConnell, James O’Keefe, Ralph Reed, Karl Rove, and even Vice-President Mike Pence. That’s a fraternal order that speaks volumes as to their political and ideological mission. And it’s why Fox News devotes segments to their lies on a regular basis.