It seems like a lifetime ago, but Donald Trump’s campaign for president ended on election day just five months back. It was a surreal undertaking that included vulgar recordings, racist endorsements, and relentless media bashing. And the repercussions from that campaign are still being felt. 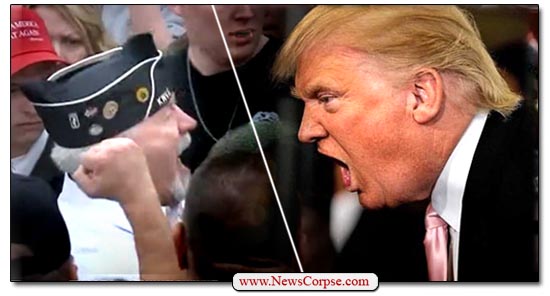 A fixture at the many rallies held by Trump was the ever-present air of hostility. Violence always seemed to be on the verge of breaking out. Protesters courageously attended the cult-like affairs despite the open threats they faced. And on several occasions Trump’s minions did assault them. In one of those incidents the victims filed a lawsuit against both the perpetrators and the Trump campaign.

On Monday one of the perpetrators, 75-year-old white nationalist Alvin Bamberger, responded with a lawsuit of his own. However, it was not directed at those accusing him of assault. It’s directed at Donald Trump. According to the filing:

Bamberger may have a case. The charge that Trump “urged and inspired” violent activity is easily proved. Trump repeatedly used overtly provocative language aimed at protesters. For instance, he once said that he would like to punch one in the face. He explicitly advised his followers to “knock the crap” out of other protesters. He reminisced about some longed for past when people exercising their right to free speech were “taken out on a stretcher.” And he approvingly spoke of a protester who had been beaten saying that he deserved it.

Even more incriminating was Trump’s promise that if his supporters attacked a protester they wouldn’t have to worry about the legal consequences because he would “pay for the legal fees.” That’s more than an incitation to violence. That’s a purposeful solicitation to commit an criminal act. Consequently, Bamberger had a reasonable expectation that Trump would back him up were he to knock the crap out of a peaceful protester.

Trump is making a multi-pronged defense. First of all, he claims that his exhortations to “remove” the protesters were not directed at rally attendees, but to security personnel. That’s a specious argument since he never made any such distinction. What’s more, his bombastic rhetoric wouldn’t be appropriate for responsibly policing crowds either. Secondly, Trump claimed to have immunity due to his position as president. That, of course, was settled long ago when the courts found that President Clinton could not use that argument to avoid litigation over his alleged sexual misconduct.

President’s are not above the law, and any allegations not related to their official duties are actionable. Since the allegations in Bamberger’s suit occurred before the election, Trump cannot evade legal responsibility. And in the end, neither can Bamberger. While Trump could be found to have “inspired” the assault, Bamberger alone is responsible for carrying it out. It’s not as if he didn’t have a choice.

So Trump’s liability would be to the victims, not to Bamberger. However, the spectacle of a president being held to account for such inspiration is disturbing, to say the least. It speaks to the brutish tendencies of a dangerously unstable so-called leader. And it is sadly emblematic of the petulant character of Donald Trump and the hostile environment he has created ever since he stepped onto the political stage.

4 thoughts on “INSPIRED By TRUMP: Lawsuit Filed Against Trump By Supporter Accused of Attacking Protesters”