Last Friday Donald Trump promised that he would be holding “a pretty big press conference” on Monday. Since then there was a violent march of white supremacists in Charlottesville, Virginia, a murdered counter-protester, and a tin-ear statement by a president who is too cowardly to upset his racist supporters. 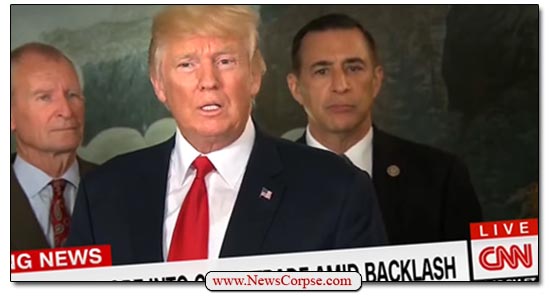 Monday morning Trump finally got around to addressing the continuing controversy surrounding Charlottesville and his appallingly callous response. However, he spent the first several minutes exalting himself and his alleged accomplishments in office. Then he made a statement that was an emotionless recitation of a script crafted to mitigate the withering criticism he has suffered for the past two days. He reluctantly spat out the words he seemed forced to utter, then left without taking a single question.

Shortly after that, Trump appeared at a photo-op to hype a vague proposal related to trade with China. When finished, he turned to leave but stopped to respond to a question from CNN’s Jim Acosta. That led to this bizarre exchange (video below):

Notice that Trump did not answer the question he was asked. Acosta inquired as to why Trump didn’t condemn the hate groups prior to Monday’s statement. That was completely ignored. So too was the fact that every comment Trump made about the violence in Charlottesville included a qualification that spread blame to “other” unidentified groups. And then Acosta asked:

What the fig is he talking about? There was no press conference, as Acosta noted. Unless Trump thinks that any gathering that includes reporters and photographers is press conference even if no questions are allowed. That’s a photo-op, not a press conference. However, Acosta took him up on the notion:

Acosta: Can we ask you some more questions then?
Trump: It doesn’t bother me at all. But, you know, I like real news, not fake news. You’re fake news.
Acosta: With all due respect, Mr. President, haven’t you spread a lot of fake news yourself sir?

First of all, if it doesn’t bother him, then why didn’t he stick around and answer some questions? There were plenty of reporters there and some recent newsworthy subjects to discuss. Even if he didn’t want to engage with Acosta, he could have replied to other reporters and fulfilled his promise to hold a press conference. And secondly, Trump’s tiresome whining about fake news has never been supported by facts. But Acosta gave the perfect response. There is abundant evidence that Trump is the biggest purveyor of fake news who has ever occupied the White House.

Trump is clearly losing whatever cognitive ability he had. He didn’t understand the question about condemning hate groups. He doesn’t know what a press conference is. And he is obsessed with falsely labeling reporters he doesn’t like as fake news. It seems with every day, Trump drifts farther from reality. And with his bellicose posturing toward North Korea, and a looming prosecution for collusion with Russia, his deteriorating mental state poses a grave risk for the country – and the world.