No one is going to be surprised that the Grand Lizard of Conspiracy Crackpottery, Alex Jones, had a massive cerebral dysfunction and captured it all on video for his slobbering fans. That’s pretty much the theme of his entire career. But the latest maniacal episode to manifest itself is just too hysterical to ignore. 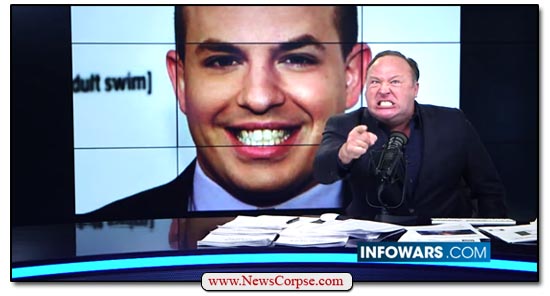 It’s difficult to decipher what set Jones off on this tirade. None of what he said made the slightest bit of sense. But his radically bizarre outburst was clearly triggered by something that mortified him. The target of this daffy disgorging was CNN’s media correspondent, and host of “Reliable Sources,” Brian Stelter. Apparently Stelter is in cahoots with Satan in a plot to control schools and banks and feast on your children’s blood. No, really! (Video below):

“Just look at Stelter again. Put him on screen. I think that’s all the broadcast should be, is just a photo of Stelter smiling. Ugh. Ugh. Oh my gosh. Oh, hell on earth. He wants to run your life. He wants to control every aspect of your life because he knows he is a cowardly degenerate sack of anti-human trash.

“I pledge before my heavenly father that I will resist them every way I can. These people are the literal demon spawn of the pit of hell. Look at him. And you know what? He is better than you if you keep letting him run your life. He runs your kids, he runs the schools, he runs the banks. This guy, this spirit, this smiling, leering devil that thinks you can’t see what he is. He is your enemy. Period.

“All the narcissistic devil-worshiping filth. I see you enemy. I see you enemy. Enemy. Enemy. You are my enemy. And I swear total resistance to you with everything I’ve got. Disingenuous, fake, false, brokeback, twisted, a defiler, a betrayer, a back stabber, a devil. You will pay. Yeah, you don’t think I see your face, scum? You don’t think I don’t see you, Stelter? I see you, you understand me? I know what you think of me and my family. I see you right back. You understand that? You understand that, Stelter? Grrhrghararagh (sp?)

“Stelter, you will fall. You will not bring humanity down. God is going to destroy you. Get him off the screen. Oh, God, they’re so evil. Just please God, free us from them. They’re drunk on our children’s blood for God’s sake. OK, I’m going to stop right now.”

I had no idea that Stelter was so all-powerful. Sure, he runs the media and maybe a couple of Costco outlets. But who knew he was controlling our kids with his smiling and leering and having a face. And what a devious scheme by the Devil to appoint someone like Stelter to bring humanity down. No one would suspect him. So we can all take comfort knowing that Jones is marshaling the forces of Heaven against Stelter and his ilk. He “sees” Stelter and knows that God will destroy him. And then maybe he will go after Tom Hanks before that demon unleashes Hell’s fury on the world.

For the record, Jones and Donald Trump are close pals and mutual admirers. Trump has appeared on Jones’ Infowars program praising his “amazing” reputation. And an Infowars “correspondent” was actually granted a White House press pass. Both Trump and Jones are obsessed with what they regard as “fake news,” and they both produce much of it themselves.