On Sunday morning’s episode of CNN’s State of the Union, there was a remarkable interview by Jake Tapper. His guest was Donald Trump’s senior advisor for policy, and thirty-two year old man still stuck in a temper tantrum he began as a five year old, Stephen Miller. The segment (video below) was a train wreck due to Miller’s relentless interruptions and shameless Trump-fluffing. 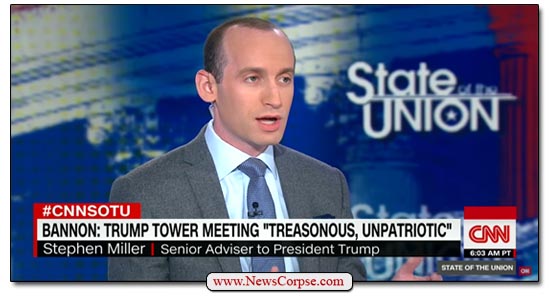 Tapper took a fair amount of abuse from Miller who accused him of being condescending, snide, and joyful for opportunities to “stick the knife in.” These personal insults were designed to evade the actual questions that Tapper asked. For instance, Tapper inquired twice whether Trump met with the people that attended Don Jr.’s meeting with Russians at Trump Tower, as Steve Bannon said. In the course of Miller’s evasion, he never denied that Trump met with those Russians.

The majority of the interview consisted of Miller fawning over his boss. He described Trump as a political genius who “took down the Bush dynasty, took down the Clinton dynasty, took down the entire media complex.” Miller’s adoration of Trump was all-consuming and more than a little nauseating. He refused to allow a question to interrupt his arrogant filibustering. Which led to Tapper reclaiming control of his show and muzzling Trump’s unhinged attack dog:

“Okay, you’re not answering the questions, I get it. There’s one viewer that you care about right now and you’re being obsequious, you’re being a factotum in order to please him. And I think I’ve wasted enough of my viewers’ time.”

With that, Tapper went to a commercial. This was exactly how a journalist with integrity should behave under these circumstances. It’s one thing to assure that all sides have an opportunity to be heard, but it’s something else to permit a political shill to hijack a news program for the purpose of force-feeding propaganda to the audience. If an interview subject is more interested in spewing talking points than honestly answering questions, then the interview should be terminated. One measure of Tapper’s correctness is the rage-soaked and delusional response he got shortly after from Trump:

Jake Tapper of Fake News CNN just got destroyed in his interview with Stephen Miller of the Trump Administration. Watch the hatred and unfairness of this CNN flunky!

While Tapper did exactly the right thing in this instance, he and most other TV reporters too often let themselves be exploited by partisan mouthpieces. It’s a game that Trump has benefited from since his first day as a presidential candidate. Every news network routinely broadcast his rallies in their entirety, despite the fact that they rarely contained anything that was newsworthy. And as President, Trump has dispatched surrogates like Kellyanne Conway and Sarah Huckabee Sanders who view their jobs as being willing to lie without restraint in the service of Trump’s ego.

The media needs to reevaluate its relationship to this presidency. There has never been an administration that was so openly hostile to the press. Nor, ironically, one that so flagrantly exploits the press to deceive the public and advance such a brazenly dishonest agenda. Trump loves to bash the media that he relies on to disseminate his hatred for it. And there is no reason that the media should tolerate that.

The press needs to cut off right-wing trolls more often, and refuse to host those who repeatedly lie. They have to stop hiring bootlickers (like CNN’s Jason Miller and Jack Kingston), who add little substance to any debate and are as predictable as the sunrise. The media must recommit itself to its core mission of informing the public and exposing the truth. Hosting people like Stephen Miller does not advance that goal. CNN isn’t helping itself or the country by hosting pathological liars. That’s what Fox News is for.

3 thoughts on “To CNN’s Jake Tapper: You HAVE Wasted Enough of Your Viewers’ Time, So Stop Doing It”