On Sunday morning Fox News aired another in its long-running series, “Everybody Loves Donald,” wherein the the lead character, Donald Trump, is slathered in a tsunami of wet kisses by a hopelessly infatuated State TV hostess. It was as embarrassing an episode of propaganda as has ever been broadcast on American television. And it can hardly be called an interview since there wasn’t a single question that didn’t lavish praise on the President or lambaste his critics. 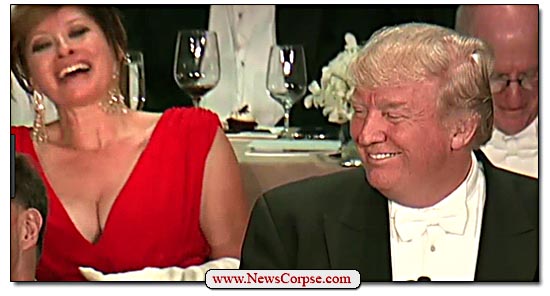 The love interest in this story is Fox News’ Maria Bartiromo, who used to be a financial reporter, but has fully transformed into a Class A Trump-fluffer. Her dialog with Trump could not have been more obsequious (look it up Donnie), as she endeavored to canonize the President and adoringly agree with every lie told. See if you can figure out why Trump loves Bartiromo so much.

During this tongue bath Trump said that “The European Union is possibly as bad as China.” And that “Everybody who bought a Harley-Davidson voted for Trump.” Really? Even the Hell’s Angels and the Mongols? He said that he believes Kim Jong Un’s promise to denuclearize North Korea, even though evidence shows he’s ramping up. When Trump says “There’s no Russia with me,” Bartiromo subserviently replies “I know.” When Trump, lying about the Democratic National Committee, says they “threw them [the FBI] out of the office,” Bartiromo dociley agrees. And she affirms Trump’s oft-repeated lie that Hillary Clinton disposed of subpoenaed emails.

But that was nothing. At one point during the love-fest, Trump and Bartiromo engaged in a conversation wherein Trump made an overt threat to any American citizen who dares to disagree with him (video below):

Bartiromo: Here we see your lovely press secretary getting asked to leave a restaurant. We see Peter Fonda, Robert De Niro having ‘Trump Syndrome.’ They’re going crazy. All of this vitriol in this country. As the commander-in-chief, as the President of this great country, what can you do to bring us together?

Oh, the poor beleaguered (and lovely) Sarah Sanders, an unabashed lie dispenser, has been the victim of naughty Hollywood actors going crazy. Bartiromo completely ignores the fact that Trump himself is the source of more vitriol than anyone currently in public life. The chat continues, but note that Trump never answers the question about how he would bring the country together. In fact, he goes the other way entirely with a not-so-subtle threat:

Trump: Well some of them do it for publicity, I hate to say it. Some of them do it for publicity. Now the Hen [It’s the Red Hen] restaurant I thought was terrible with Sarah, I thought it was terrible.
Bartiromo: It was awful.
Trump: I think some of the things that are said are terrible. And our people are so incredible. You know, there’s probably never been a base, in the history of politics in this country, a base like my base. I hope the other side realizes that they better just take it easy. They better just take it easy because some of the language used, some of the words used, even some of the radical ideas, I really think they are very bad for the country. I think they’re actually very dangerous for the country.
Bartiromo: And all the while you’re creating economic growth and you’re creating job opportunity.

Thanks, Maria, for inserting that non sequitur lie about the economy in response to Trump’s political intimidation. For Trump to imply that “the other side…better take it easy” blatantly suggests that there will be consequences if they don’t. And those consequences will be mete out by his historically unprecedented base. In fact, there are historical parallels to Trump’s base. They are often referred to as Brown Shirts, Storm Troopers, and now Republicans.

And thanks also to Donald Trump who, in response to a question about bringing people together, managed to send an undisguised message of hostility and potential violence. His battle warning to anyone who opposes him should make decent Americans cringe. But it should also make them mobilize for the upcoming election in November in order to insure a massive renunciation of Trump’s anti-American regime and his transparent aspirations for a brutal, totalitarian tyranny.

Trump warns his critics to "take it easy." pic.twitter.com/1v5PzZQO6z