When Fox News began in 1996, the intention was to develop an overtly partisan, right-wing network that would skew the news to the ultra-conservative views of Rupert Murdoch and Roger Ailes. After achieving that goal they set their sights on a business network that would eventually do the same thing. 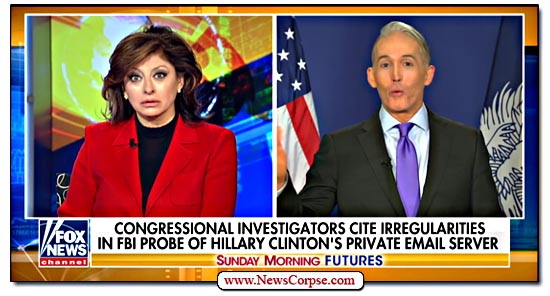 The Fox Business Network was never aimed at providing useful financial information. When it launched they put Neil Cavuto at the helm, a move that can only be interpreted as advancing the same conservative biases that infest his daily program on Fox News. And the execrable Lou Dobbs has long been a fixture on the channel. Three years ago they hired Maria Bartiromo who had been a financial correspondent on CNBC for twenty years. But it’s obvious now that Bartiromo has been inducted into the Fox mindset as she shamelessly disgorges wingnut propaganda.

On her Sunday program, Sunday Morning Futures, Bartiromo interviewed Republican inquisitioner Trey Gowdy on a subject that Fox News and the GOP have been desperately trying to revive: Hillary Clinton’s crime-riddled past (video below). Never mind that she has been the target of blatantly prejudiced investigations for twenty years that haven’t turned up a hint of wrongdoing. With all of Donald Trump’s illegal entanglements, the GOP needs to find ways to muddy the public discourse.

The questions that Bartiromo asked Gowdy are all that is needed to observe how hopelessly biased she is. Each one was a leading question that implied criminal intent to Clinton. As if Gowdy needed any help in turning his partisan innuendo into outrageous allegations. Here are the severely slanted questions Bartiromo asked verbatim:

“Do you now have the documents that you have been requesting to best assess whether or not there was a massive abuse of power by the FBI around the election last year?”

“So where does this lead? I mean, you’ve been stonewalled since August. You’re finally getting documents last week and this week week that you’ve been asking for since August. We know for example when you look at the Hillary Clinton side of things, her IT manager, Brian Tagliano, initially said he never deleted anything to the FBI. He told the FBI ‘I didn’t delete anything.’ Then apparently has an ‘aha’ moment and says ‘Oh wait, yes. I did delete emails.’ After we know that those were actually recovered. And he gets immunity. So he gets immunity despite the fact that he lied to the FBI, deleted emails, and didn’t tell anybody that there were these emails that existed.”

“Peter Strzok, when he was texting his girlfriend, Lisa Page, said that we need an insurance policy in place. Now Congressman, we have been hearing bits and pieces of this so-called Russia probe, so-called collusion between Trump and the Russians, with absolutely zero evidence. Was that the insurance policy? Peter Strzok essentially saying to his mistress, ‘Look, we’re just gonna keep on investigating Donald Trump should he win.'”

“Americans want to see the rule of law. If we cannot trust the FBI, the CIA – by the way, the IRS. We know what the IRS did a year ago, or two years ago. Then what is the point of the freedoms of America?”

“Let me ask you this because we’ve been watching this Russia probe. How long is this gonna go on? Because we still haven’t had any evidence of any collusion. When is it appropriate for Bob Mueller to come out and say ‘Yes, definitively there is no collusion here. But what I have uncovered is collusion at the top of the FBI between the FBI leadership and Hillary Cliinton.”

These are the sort of questions that hardly require answers. The response is built into the inquiry. Particularly notable is the question that seeks to put words into special counsel Mueller’s mouth implying collusion on Clinton’s part. And asserting that Gowdy and Nunes are truth-seekers is painfully delusional. They are among the most acutely biased Republicans in the country. But Bartiromo regards them as more credible than the nation’s top law enforcement professionals. Yet this is the unethical posture that Bartiromo has taken in order to serve her masters at Fox News and in the Trump administration. It’s downright embarrassing and more than a little nauseating.