The latest hyperactive frenzy on Fox News is a tragic story about a murdered college student, Mollie Tibbets. Her body was found after having been missing for more than a month. And a suspect is now custody. That suspect has been the subject of a relentless media barrage from Fox News who immediately labeled him an “illegal immigrant.” But all is not what Fox says (as usual). 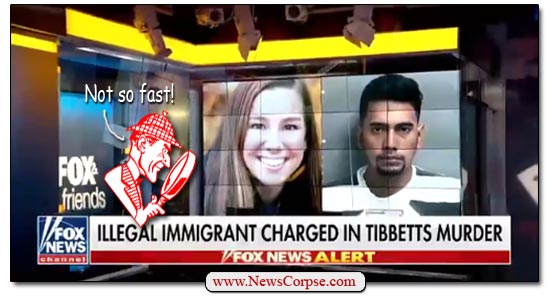 First and foremost, the Des Moines Register is reporting that Cristhian Bahena Rivera was in the U.S. legally. This is according to his lawyer who said that he is “Sad and sorry Trump has weighed in on this matter in national media which will poison the entire possible pool of jury members.” The story went on to say:

“Rivera has lived in Iowa for four to seven years, working at Yarrabee Farms, a Brooklyn-area farm owned by several family members, including brothers Eric, Dane and Craig Lang. Craig Lang, a prominent Republican, has verified that Rivera is in Iowa legally, according to Richards’ motion.

“‘Craig Lang supports Cristhian’s right to be in this jurisdiction and for the government to support any other idea of status publicly flies in the face of such statement,’ Richards wrote.”

Nevertheless, Donald Trump posted a tweet assailing the suspect as undocumented, despite evidence to the contrary. And then he went on to politicize the tragedy by calling for his idiotic and useless wall to be built. Even worse, he adopted rhetoric associated with the children that he and his inhumane administration ripped from the arms of their parents, torturing these families, hundreds of whom he is still unable to reunite. He said that:

“Mollie Tibbets is now permanently separated from her family. A person came in from Mexico illegally and killed her. We need the wall.”

For its part, Fox News elevated this story to the top of their broadcasts, even above the felony convictions of Trump’s campaign manager, Paul Manafort, and personal attorney, Michael Cohen. As heartbreaking as Mollie’s story is, the prospects of the nation’s president being implicated in criminal acts should take precedence on a national “news” network. It’s not as if Fox is just generally concerned about the welfare of innocent college students who have been murdered. After all, they never blanketed their coverage for any of these stories where the suspect was American:

And those are just a few of the sad stories from this year. Clearly Fox News, and Trump, are using Mollie’s murder to advance their racist political agenda. They couldn’t care less about her or her family. If they did they wouldn’t have made the suspect’s immigration status – which is still unconfirmed – a feature of their reporting. Nor would they have pushed for the purely partisan and divisive construction of a border wall. The Tibbets family should be outraged at having been used this way. And at least one member of the family is. A cousin tweeted a response to a racist comment by frequent Fox News guest Candace Owens that really says it all:

hey i’m a member of mollie’s family and we are not so fucking small-minded that we generalize a whole population based on some bad individuals. now stop being a fucking snake and using my cousins death as political propaganda. take her name out of your mouth. https://t.co/xxZNBF0Uv9