Another day, another malicious assault on the Constitution and its First Amendment protections for a free press. Donald Trump is continuing to march toward a totalitarian state where he controls the media. And in his latest manic outburst on the subject he goes further than ever to lie about and threaten both journalists and American workers employed by the media that he so desperately hates. 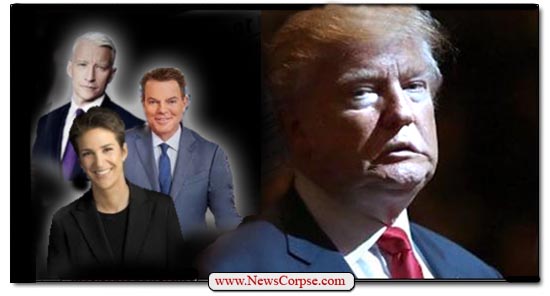 Trump’s noxious tweetstorm began with a gleeful nod to the news that an “activist investor” has acquired a bundle of AT&T stock:

“Great news that an activist investor is now involved with AT&T. As the owner of VERY LOW RATINGS @CNN, perhaps they will now put a stop to all of the Fake News emanating from its non-credible “anchors.” Also, I hear that, because of its bad ratings, it is losing a fortune…..”

…But most importantly, @CNN is bad for the USA. Their International Division spews bad information & Fake News all over the globe. This is why foreign leaders are always asking me, “Why does the Media hate the U.S. sooo much?” It is a fraudulent shame, & all comes from the top!

Trump’s celebration of this investment is a typically shallow analysis considering the investor purchased a share of AT&T that is only a little more than one percent of its outstanding shares. That isn’t gong give him any real leverage, and he’ll have no role in board or management decisions. What’s more, shareholders have absolutely zero influence over the editorial content of a news network, nor should they. So Trump is wandering around in a fantasy world that he clearly knows nothing about.

Trump also knows nothing about the state of the cable news business. His hatred for CNN notwithstanding, the network is enjoying the highest ratings and revenue in its history. This is an example of Trump expressing the delusions in his diseased brain as if they had some correlation to reality. But what’s worse about this Twitter tantrum is that Trump is maligning an American company before the whole world. That is recklessly inappropriate for the President of the United States, and a betrayal of the thousands of American workers at CNN and AT&T.

In addition, Trump repeated the flagrant lie that foreign leaders have asked him “Why does the Media hate the U.S. sooo much?” Perhaps Vladimir Putin or Kim Jong Un might have asked him that, but they probably also ask why he doesn’t arrest and/or assassinate them. After all, he has openly yearned for those powers himself. For the record, the media doesn’t hate America, and they don’t even hate Trump. They hate lies, corruption, treason, and ignorance. It isn’t their fault that Trump exemplifies all of those abhorrent traits. But Trump wasn’t through ranting:

As bad as @CNN is, Comcast MSNBC is worse. Their ratings are also way down because they have lost all credibility. I believe their stories about me are not 93% negative, but actually 100% negative. They are incapable of saying anything positive, despite all of the great things…

Once again, MSNBC’s ratings and revenue are growing rapidly. Trump may wish that news networks that tell the truth about him were failing, but the opposite is true. Meanwhile, at Fox News their ratings are still impressive, but their revenue is in a steep decline because advertisers don’t want to be associated with the Trump-fluffing, white supremacist dogma that is the hallmark of Fox. And if Trump is tiring of negative stories about him, he might try doing something positive for once. Or at least stop doing so many things that are objectively stupid, destructive, racist, and/or corrupt.

Trump went on to bash the media in general as “an arm of the Democrat Party.” without providing any proof whatsoever. But that’s been his modus operandi for years. And coming from someone who leans so heavily on his State TV network (aka Fox News), it’s starkly hypocritical. His intent is to drag down the reputation of the press to prevent people from taking it seriously when they report what he’s actually doing and saying. He actually admitted that to Leslie Stahl when she asked why he attacks the press. “You know why I do it?” he replied. “I do it to discredit you all, and demean you all, so when you write negative stories about me no one will believe you.”

Everyone needs to remember that whenever they hear him criticize the media. By his own admission he isn’t doing it to correct the record or to stand up for the practice of journalism. He’s doing it to brainwash anyone dimwitted enough to fall for his deliberately deceitful disparagement of honest reporting. Sadly, there are way too many Deplorables who are happy to wallow in the filth that Trump spews, even after they’ve been told – by him – exactly what he’s doing.

3 thoughts on “America First? Trump’s Attacks on the Media are Both Ignorant and Anti-American”