Donald Trump long ago demonstrated that he is utterly incapable of expressing compassion or empathy. This is especially evident in his handling of the COVID-19 (coronavirus) pandemic. As the number of Americans infected (1,000,000+) and dead (63,000+) continues to rise, Trump focuses his public statements on what he regards as a flawless response to the unprecedented suffering and loss. 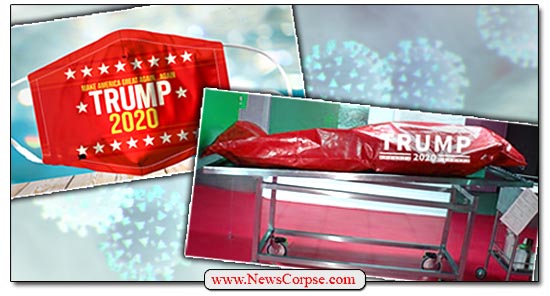 On Wednesday Trump’s Senior Advisor (and son-in-law), Jared Kushner told Fox News that Trump’s ignorant incompetent performance during the crisis was “a great success story.” Trump followed that up on Thursday saying that “Our death totals, our numbers per million people, are really very, very strong. We are very proud of the job we have done.” It’s painful to watch Trump paying tribute to himself when the disastrous consequences of his negligence is so apparent. His callousness and conceit insults the memory of the deceased and their grieving families.

However, in Trump World he had still not achieved the pinnacle of heartless insensitivity that he seems to be striving for. That’s why the Trump campaign is now reported to have ordered Trump-branded face masks for Americans living in fear of the pandemic that was worsened by a level of magnitude due to Trump’s inept mishandling and voracious ego.

Recent analyses of Trump’s public remarks have affirmed that he has an acute obsession with exalting himself no matter what else is happening. The New York Times found that in over 260,000 words spoken by Trump at his Coronavirus Task Force briefings (aka Trump 2020 Reelection Campaign Infomercials), “nearly four times more statements were devoted to praising himself than offering condolences to victims of the coronavirus.” A similar analysis by the Washington Post found that out of 13 hours of speaking time, “Just 4 1/2 minutes were devoted to offering condolences to victims of the virus.” The remaining time was consumed mostly with verifiable lies and bragging about imaginary accomplishments.

The thought of people walking around with banners strapped to their faces that identify the actual person responsible for their need to wear such protective gear is a chilling irony. Trump is effectively branding the virus itself with this advertisement, in much the same way as he plasters his name on every other cheesy product that he tries to take credit for. But a better product placement idea for the Trump campaign would be to slap his logo on the 100,000 body bags that his administration just purchased for the future casualties of his failures. Now that would be real truth in in advertising.

MEANWHILE: "The federal government placed orders for well over 100,000 new body bags to hold victims of COVID-19 in April."https://t.co/GqP5i3r271

7 thoughts on “Trump-Branded Coronavirus Face Masks? Yes, He Really is that Sick”