There has been a measure of devolution observable in the United States Congress. Some of its newer members on the Republican side are adherents to preposterous conspiracy theories and have a disturbing aversion to facts and/or truth-telling. Names that rise to the top of that list include Lauren Boebert (who recently blamed President Biden for a shortage of Chick-fil-A dipping sauce), and Marjorie Taylor Greene (who is a committed devotee of QAnon). 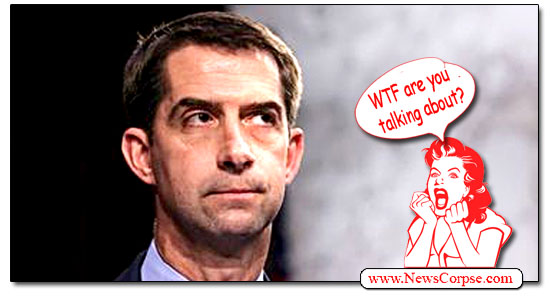 Another Republican conspiracy crackpot is Sen. Tom Cotton. On Monday Cotton took the Senate floor to do his best Tucker Carlson impersonation. That’s a talent that consists mainly of asking a bunch of stupid questions without providing any answers, but making sure that whatever is being insinuated will stick in the gullible minds of his target audience.

Cotton’s topic was the Israeli bombing of a building in Gaza that housed offices of the Associated Press, and also, allegedly, a Hamas military facility. The bombing was highly controversial and was covered by the media in detail. However, the press missed some of the questions that Cotton raised, mainly because they were really stupid questions:

“Whys is the Associated Press sharing a building with Hamas? Surely these intrepid reporters knew who their neighbors were. Did they knowingly allow themselves to be used as human shields by U.S. designated terrorist organization? Did the AP pull punches and decline to report for years on Hamas’ misdeeds? I submit that the AP has some uncomfortable questions to answer.”

“Did they allow themselves to be used as human shields … ?” pic.twitter.com/nUu8saYzdA

Let’s take this from the top. Whether the AP was sharing a building with Hamas is not an established fact. Cotton has no evidence of it, nor does U.S. intelligence (at least as far as they’re admitting). Israel says they have evidence but have delayed releasing it while they are preoccupied with the ongoing conflict. So Cotton’s first question is based on an assumption for which he has no facts.

Cotton goes on to make a back-handed compliment suggesting that the “intrepid reporters” at AP would know all of their neighbors. Again, there is nothing to support that assertion. And there is no reason to assume that the AP had investigated every other tenant in the building. What’s more, if Hamas occupied an office there, they would likely have kept it secret and wouldn’t have been running around with Hamas armbands or other identifying insignia.

From there Cotton makes a repulsive charge that the AP might have been allowing themselves to be used as human shields. WTHF? It is profoundly irresponsible and reckless to make such a charge without irrefutable proof. He is, in effect, accusing journalists of engaging in terrorism.

Finally, Cotton implies that because of the alleged proximity of a Hamas office, the AP would deliberately distort their reporting to benefit Hamas. Again, Cotton is making a horrific accusation without a shred of evidence. He doesn’t even supply any AP stories that he thinks might have soft-peddled Hamas. He’s just taking wild swings in the dark.

This is the sort of thing you would expect from a disreputable cretin like Tucker Carlson. But for a U.S. senator to be flinging unsupported allegations as serious as these from the Senate floor is a grotesque abuse of his position.

Unfortunately, that is what we have come to expect from a Republican Party that still believes that Donald Trump won the 2020 election and that his victory was stolen from him by a massive cabal of Democrats, Republicans, journalists, election officials, voting machine manufacturers, Venezuelans, Germans, and Ukrainians. So if anyone should have to answer some uncomfortable question it’s Cotton and his GOP confederates who actually did support the domestic terrorists who invaded Congress on January sixth.