The relentless – and mostly impotent – attacks on President Biden by Fox News have escalated steadily ever since his inauguration. But they are not merely petulant political broadsides by sore losers. They are also benefiting America’s enemies at a time when our domestic institutions are uncommonly fragile due to Donald Trump and his Republican confederates’ assault on democracy. 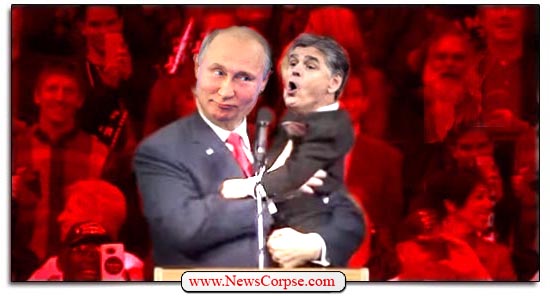 In an effort to maintain his position as Fox’s Senior Trump-fluffer, Sean Hannity is ratcheting up his rancid rhetoric. On Wednesday night he launched into an anti-Biden tirade that can only be characterized as pro-Russian propaganda (video below, if you can stomach it). Hannity began with his now tediously routine, and utterly infantile, insults aimed at Biden’s mental acuity (a debate the American people ended long ago):

Hannity’s grade-school “sippy cup” taunt has become a fixture on his clown show, despite his having been brutally humiliated for prior references to it. He followed up his baby talk with a video clip of Biden rationally and responsibly relating the climate change warnings of Pentagon officials:

“We must all commit to an ambitious climate action if we’re going to prevent the worst impact of climate change, limiting global warming to no more than 1.5 degrees Celsius. We need the global transition to clean energy technology.

This isn’t a new concept. Climate change was cited as a serious threat to American national security by Donald Trump’s secretary of defense, Jim Mattis, George W. Bush’s secretary of defense, Don Rumsfeld, and by at least four other defense secretaries of both parties. Hannity is either too stupid to know this, or is deliberately ignoring it. So he just rambled on saying…

“Okay. In just a few days that guy will sit down with the hostile actor with the hostile regime of Russia, Vladimir Putin. You know, the country that just hacked our energy and our beef industries, and I fear that Vladimir will eat Joe’s lunch. Embarrass us all. That is not good for this country. It is not good for the world. And Vladimir will see what we all see. That Joe Biden is frail, weak, and a cognitive mess who can do little more than read far-left talking points on a TelePrompTer. And he actually struggles to do that.

What isn’t good for the country or the world is taking Putin’s side, and disparaging America’s President, just days before a crucial summit meeting (and this isn’t the first time). Hannity is obviously in the service of his master, Vladimir Putin, with his hateful demeaning of Biden. This vile screed couldn’t be more helpful to Russian interests if the Politburo had written it themselves. And what ever happened to the maxim that “politics end at the water’s edge,” meaning that criticisms of the President pause when he or she is overseas on the nation’s business?

Clearly Hannity isn’t interested in what’s good for the country. He is only interested in maligning Biden, no matter how detrimental it is to American interests. And Fox News has made it clear that they stand firmly behind Hannity’s treasonous rants. This sort of strident anti-Americanism is riddled throughout the day on Fox News programs. And it should make it abundantly clear to every decent citizen what we’re up against.

4 thoughts on “Russian Agent? Sean Hannity’s Infantile, Anti-American Attacks on Biden are a Gift to Putin”