This holiday season Americans will be busy visiting with friends and family and planning festivities for Christmas and New Year’s. It is a season full of joy and comradery and hope. But Mike Lindell, the MyPillow mogul who has become Donald Trump’s foremost election fraud flouting flunky, would like you all to keep open some time for another of his screwball circus acts. 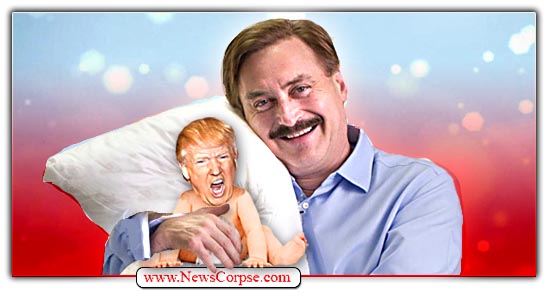 Lindell has announced that he is organizing a public protest against Trump’s Ministry of Disinformation, Fox News:

“We are going to do something out in front of Fox News, I think we should have – you know, if people want to go down there, maybe we should give out Frank Speech signs. [Fox News is] a big part of our country being taken from us.”

Based on the record of abject failure of Lindell’s previous media events, this demonstration promises to be an affair to dismember. It will rank up there with his “Absolute Proof” crocumentary, wherein he declared that he would provide irrefutable evidence that Trump won the election. His presentation was a spectacle of hyperventilating harangues and hothead hyperbole. The only thing it was missing was the “proof” part. Although it did earn him a hysterical disclaimer from OAN prior to airing it, and a place in the billion dollar defamation lawsuit by Dominion Voting Systems.

Lindell also staged a “cyber symposium” that likewise guaranteed confirmation of election fraud. But this event was so preposterous that even Fox News refused to accept advertising for it. As a result, Lindell pulled all of his ads from Fox. Which must have upset Tucker Carlson where MyPillow was his biggest – and pretty much last – advertiser.

Lindell isn’t the only right-winger who is angry with Fox News. Trump has been bashing them regularly, despite continuing to appear with devoted Trump-fluffers like Jeanine Pirro, Sean Hannity, Maria Bartiromo, Laura Ingraham, and Mark Levin. And with the release of Tucker Carlson’s horrifically anti-American diatribe, “Patriot Purge,” – that defends the violent January 6th StormTrumper riots in Washington, D.C. – many staunchly conservative Republicans, and even Fox News staffers, are distancing themselves from the network. NPR is reporting that…

“[Fox anchors] Bret Baier and Chris Wallace, shared their objections with Fox News Media CEO Suzanne Scott and its president of news, Jay Wallace. Those objections rose to Lachlan Murdoch, the chairman and CEO of the network’s parent company.”

None of the Fox executives responded to NPR’s request for comments. However, two longtime Fox contributors, Steven Hayes and Jonah Goldberg, did respond. They just resigned citing Carlson’s pro-insurrection piece as the last straw. And their resignations touched off a wave of support from other Fox regulars.:

This exodus from Fox News may seem like a positive development that could impact their future editorial mission. But don’t count on it. The honchos at Fox don’t appear the least bit interested in slanting back toward sanity and/or reality. And CNN’s Jim Acosta articulated that in a succinct assessment of the state of Fox News:

Acosta: Fox News can’t run away from Trump or Trumpism. Fox is Trump and Trump is Fox. This idea that Rupert Murdoch is suddenly going to change course, pull the plug now, I’m calling bullshit on that one too pic.twitter.com/9o8qAErZUB

UPDATE: The Fox News protest was, predictably, a total bust that drew about dozen Lindell flunkies.

6 thoughts on “SAVE THE DATE: MyPillow Pinhead Mike Lindell is Organizing a Protest Against Fox News”