In another example of the declining fortunes of the right-wing extremism propagated by conservative media and displayed so prominently by the GOP family of clowns competing for the Republican nomination for president, Nielsen has reported that the ratings for Fox News have taken a steep dive in 2011. 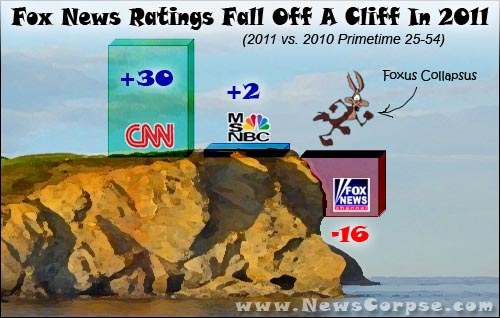 Of the three main cable news networks, Fox News is the only one that went down compared to their ratings in 2010. And a double-digit decline at that. FoxPods will, as usual, point out that Fox is still the top cable news network, but that is beside the point. Its audience is peeling away at a rapid rate and over time they will be unable to sustain their leading position. It is also important to put those numbers in context. While Fox is the #1 cable news network, they lag far behind the broadcast nets. In fact, the highest rated program on Fox (O’Reilly Factor) has about half the viewers of the lowest rated broadcast news program (CBS Evening news).

All three cable networks were impacted by extraordinary events that affected their ratings performance. CNN was helped by breaking news stories like the death of Osama Bin Laden and the Japanese earthquake/tsunami/nuclear crisis. Because CNN has the best developed network of international bureaus, viewers frequently turn to CNN for major breaking news events.

MSNBC was hurt by the loss of Keith Olbermann and numerous schedule shakeups, but still managed to land in positive territory. Fox, of course, lost a notorious personality in Glenn Beck, but that likely kept Fox from declining even more than they did. Beck’s ratings were in free fall and dropped 37% between January and his sign-off in June. His replacement, “The Five,” has held pretty steady since its debut.

The fall of Fox News is striking evidence of the shift in the nation’s attitudes toward the ultra-conservative philosophy advanced by Fox and their brazenly biased facilitators. For Fox to be alone in decline in a year that includes a Republican-only primary campaign is a devastating indictment of the network and the propaganda tactics they employ.

2012 will provide a more diverse range of electoral news as the general election takes shape and Democrats are included in the story arc. That is not likely to boost Fox’s ratings position, but it will probably inflame their rhetoric and result in even more divisive attacks and demonstrations of derangement. Hold on to your hats, America.