Obama Derangement Syndrome has spread to infect every cell of the conservative brain. The depth of their sickness has finally become so severe that it negates any hope of recovery.

The “Moonie” Washington Times published an article with the headline: “New Obama slogan has long ties to Marxism, socialism.” There is nothing new about the rabid right’s delusional assertions that President Obama is a Marxist, socialist, Kenyan, Muslim, Anti-Christ, who is conspiring with communists, Al Qaeda, the New Black Panthers (all four of them), and Sesame Street to subvert democracy, indoctrinate our children, and deflower our women. But this particular incident is rooted so firmly in dementia that it deserves closer attention and merciless ridicule.

The problem cited by the Washington Times, and picked up by Fox Nation and Breitbart among others, is that the word “Forward,” used prominently in a new Obama campaign video (posted below), is inherently wicked and representative of dastardly evildoers seeking to establish a tyrannical, Islamic, atheist, caliphate throughout the world – or something. The article states that…

“The Obama campaign apparently didn’t look backwards into history when selecting its new campaign slogan, ‘Forward’ — a word with a long and rich association with European Marxism. Many Communist and radical publications and entities throughout the 19th and 20th centuries had the name ‘Forward!'”

So there you have it. By using a word in the English dictionary that means “ahead, onward,” the Obama camp has revealed their commitment to worldwide socialist rebellion. Never mind that the associations cited in the conservative press are a hundred years old, or that the word has been used in innumerable other contexts before and after those associations. For instance, the pinko Ronald Reagan Society at his alma mater, Eureka College, uses the phrase “Reagan Forward.” Even Fox News used it in their on-air promos:

Initially, when the Obama video was released, the cry from the right was that the campaign had lifted the slogan from MSNBC which uses the phrase “Lean Forward.” That allegation was carried by conservatives from Fox News contributor Michele Malkin to the New York Post to Glenn Beck’s TheBlaze, and others. Apparently that didn’t stir up enough bile among the right-wing faithful, so they had to escalate the attack to suggest this affiliation with ancient enemies.

Ironically, it was Fox News who took great offense to an allegation by John Aravosis of AmericaBlog late last year, that Mitt Romney’s campaign had adopted a slogan previously used by the Ku Klux Klan: 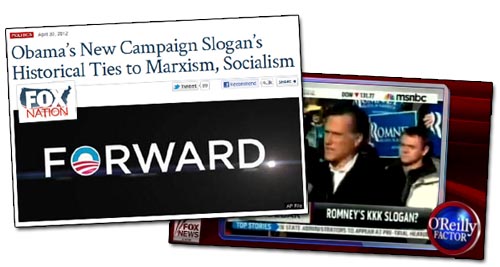 On several occasions Romney included a phrase in his stump speech that closely resembled one that the KKK used frequently in the 1920s: “Keep America American.” Subsequently there was some debate as to whether Romney actually said “Keep America America,” a small difference of the single letter “n” at the end. The outrage from the right was immediate and fierce. How could those awful liberals insinuate that Romney was a Klan member? Fox News was all over the story with even their top program, The O’Reilly Factor, devoting segments to it.

Of course, nobody ever implied that Romney was a Klan member. They merely noted that his campaign had not sufficiently researched the language that they were making such a prominent part of their strategy. And they made the additional point that, if it were a Democrat whose slogan could be tied to some past perceived ignominy, Republicans would have feasted on the gaffe. Aravosis seems prescient in retrospect for having facetiously said…

“In an era in which it’s apparently okay for Republicans to accuse President Obama of being a socialist, I guess we now need to ask if Mitt Romney is a Ku Klux Klansman. Not whether Romney inadvertently is using the KKK’s number one slogan from the 1920s on the stump, no, the Republicans would say, if this were a Democrat, that clearly the candidate was a closet member of the KKK.”

Now that speculation has been made real by a conservative effort to advance their smear campaign against Obama. And their is nothing facetious about the right’s belief that the President is a socialist. When an anchor on MSNBC reported the story about Romney’s slogan, the right swung back hard in retaliation. MSNBC then issued a quick and thorough apology on the air. And that’s where the comparison ends. The right proudly and obstinately clings to their abhorrent missteps – probably because they aren’t missteps, but deliberate slander.

Conservatives have been making unfounded claims that the President is a socialist since before his inauguration. These were not merely observations about similarities in rhetoric, but outright accusations that they assert as fact. And now they are engaging in the exact same tactic that just last December they condemned as character assassination.

This is about as good an example of the ethical vacancy of the modern right as there will ever be. Their fixation on inventing new methods of tarnishing the President has devolved to condemning him for using the English language. So today the word “forward” is off-limits. Tomorrow will it be “progress” or “justice” or “the” or [fill in the blank].