In the annals of advertising, there are some notorious chapters wherein misguided persons or organizations justified displaying disgusting and hateful images and messages on billboards. However, it will be a long time (I hope) before anyone comes close to sinking as low as the Heartland Institute has done with its new series of advertisements promoting its upcoming anti-environment conference in Chicago. 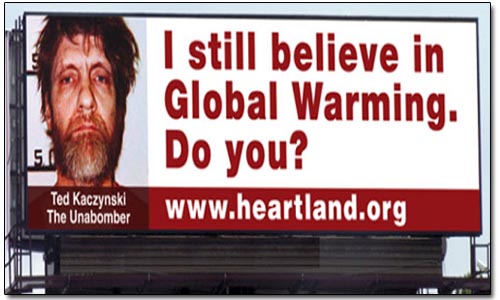 The Heartland Institute is a far-right think tank that denies the scientific reality of climate change. It is notoriously anti-science and has previously taken positions that rejected claims that tobacco was bad for your health. The reason for their advocacy of the absurd is that they are funded by corporations with vested interests in deceiving the public (i.e. Phillip Morris, ExxonMobil, Pfizer, etc). Additionally, they receive grants from ultra-conservative zealots like the Kochs, Scaifes, Waltons, etc.

This billboard campaign is particularly repulsive in that it associates honest and clear thinking advocates for the environment with some of the most horrific creatures of crimes and atrocities. In addition to the Unabomber, the Heartland’s campaign features Charles Manson and Osama Bin Laden. The argument they are making is that these monsters believed in climate change and therefore you are also a monster if you believe in it. That is not an implied interpretation. It is what they say explicitly in their own justification:

“These rogues and villains were chosen because they made public statements about how man-made global warming is a crisis and how mankind must take immediate and drastic actions to stop it.” […]

“Because what these murderers and madmen have said differs very little from what spokespersons for the United Nations, journalists for the ‘mainstream’ media, and liberal politicians say about global warming. […]

“The point is that believing in global warming is not ‘mainstream,’ smart, or sophisticated. In fact, it is just the opposite of those things. […]

“The people who still believe in man-made global warming are mostly on the radical fringe of society. This is why the most prominent advocates of global warming aren’t scientists. They are murderers, tyrants, and madmen.”

Aside from being grossly insulting, the Heartlanders are 100% wrong. The vast majority of scientists, climatologists, and other experts agree that climate change is occurring and that human activity is at the very least a significant contributor. There is no dispute among reputable scientists. The only dispute comes from conservative politicians, pundits, and researchers working for the corporations profiting from the destruction of the planet’s ecosystem.

The tactic of recruiting murderers and madmen for this campaign disparages all of the sincere people who are fighting for a better, cleaner, healthier world. But it also opens the door to reciprocal attacks on the Heartlanders. For instance: 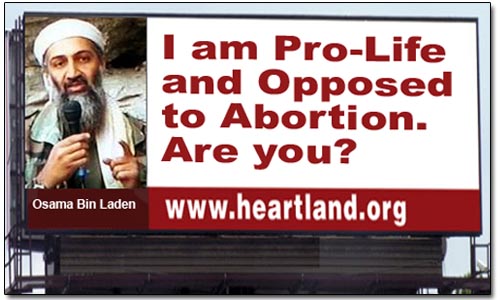 That’s right. Osama Bin Laden, Timothy McVeigh, Scott Roeder, Eric Rudolph, and others, were all anti-abortion extremists and terrorists. Does that mean that all pro-life activists can be lumped together with these despicable characters just because…

“…what these murderers and madmen have said differs very little from what spokespersons for the [National Right to Life Committee], journalists for the ‘mainstream’ media, and [conservative] politicians say about [abortion]?”

See how easy this is? Hitler was anti-union. Stalin opposed gay marriage. Anders Breivik hated Marxism. I could go on. The obvious conclusion is that conservative principles inspire mass murderers, right?

The propaganda purveyors at the Heartland Institute have demonstrated that they are not a serious organization whose opinion matters to people who truly care about this issue. The media ought not to provide a platform for their views and politicians who associate themselves with this group should be asked whether they endorse the hate mongering that flows from these phony Heartlanders. There is simply no room in the debate for this sort of irresponsible rhetoric. Especially when it comes from an enterprise that has been lying about the substance of the matter for years.

4 thoughts on “Heartland Institute: Osama Bin Laden Was Pro-Life. Are You?”