The Republican National Convention Kvetch-a-Sketch continues. Last night Mitt Romney’s wife gave a speech that included the shocking revelation that she loves her husband and that she thinks he’d be a pretty good president. Fox News broke into their Karl Rove convention analysis with a “News Alert” to announce this hot scoop (of manure). But the real news item was Ann’s salute to American women: 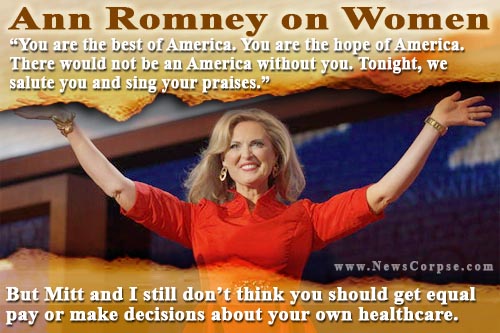 Too bad that Ms. Romney and her husband don’t have enough faith in American women to make decisions about their own health care; or get equal pay for equal work; or receive sustained funding for family services like Head Start and the Children’s Health Insurance Program.

Romney’s singing the praises of women is a dour dirge that she refuses to back up with actual policies that women really need and want. It is hollow rhetoric intended to stem the rapid decline of support for her husband by America’s women. And it won’t work. There is a reason that Mitt’s support is so low. It has something to do with the GOP war on women that Romney supports in full. And vacant words from Stepford wives will do nothing to bring Women to the Romney campaign.