Mitt Romney proved yesterday that he lacks the character and experience to manage sensitive foreign relations. His politically motivated rush to judgment was criticized by a broad swath of politicians and pundits including conservatives like Peggy Noonan, Matt Lewis, Bill Kristol, and even Romney’s campaign chair, John Sununu.

Now the dead-enders in the right-wing press are slobbering over what they believe is a smoking gun that implicates the media in a vast conspiracy against Romney. Their evidence is a short video (posted below) wherein a couple of reporters discuss the questions they plan to ask Romney about the tragic events in the Middle-East. Fox Nation tacked on a sensationalist headline that read: HOT MIC: ‘Objective’ Reporters Caught Conspiring to Trip Up Romney at Press Conference. 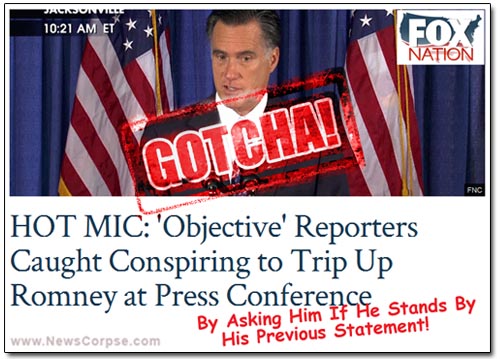 The Fox Nationalists (via The Daily Caller) implied that there was some sort of collusion between a roomful of reporters to ambush Romney. In fact, the video shows that it was only one reporter mentioning to another what she intended to ask. So what was the question at the heart of this conspiracy to embarrass the GOP candidate? “Do you stand by your statement or regret your statement?”

What an outrage! The liberal lamestream media is seeking to nail a Republican candidate for the highest office in the land by requesting that he affirm something that he had already said. This is nearly as despicable as the time the media hurled a gotcha question at Sarah Palin about what newspapers she reads. And it’s a particularly egregious affront since Romney earlier in his campaign informed the press that “I stand by what I said, whatever it was.” Shouldn’t that have sufficed for the remainder of the campaign?