A new video produced by MoveOn.org with help from Michael Moore is causing some right-wingers to reach for the smelling salts. The rest are falling off their chairs with outrage and frothing criticisms. What has them so unraveled?

OMG! Old people cussing. The world has finally succumbed to Satan’s call. What better evidence is there that Armageddon is imminent?

This little video is generating thousands of views, and millions of guffaws, across the InterTubes, but in the realm of the right it is stirring nothing but anxiety and outrage. It has been featured on Fox News on at least three programs: America Live with Megyn Kelly, Hannity, and the O’Reilly Factor. All of these “news” alerts castigated the video with vitriol usually reserved for terrorist bombings or Obama sightings.

Sean Hannity and Megyn Kelly both brought Fox News “Democrat” Kirsten Powers on to fulfill her mission of pretending to be a liberal while bashing her alleged allies. As the representative of the left she responded to Kelly’s leading questions saying “I don’t know why Michael Moore would do it, but even worse, I don’t know why MoveOn.org would be associated with it.”

Far worse, however, was Bill O’Reilly’s Talking Points Memo segment that he titled “Threats From The Far Left.” In his feverish denouncement of the video he said “So now the far left is threatening violence if President Obama loses the election.” Then he charged that President Obama is “culpable” for the video because he hasn’t condemned it. Really?

Someone needs to inform O’Reilly that this video is what we humans like to call “comedy.” It is not threatening any actual violence. For a demonstration of actual threats, just visit the Fox News community web site, Fox Nation. There you will find Fox fans literally yearning for Harry Reid to die; for Nancy Pelosi to have her skull crushed; cheering Arlen Specter’s death; advocating the assassination of President Obama. Since O’Reilly has never condemned these remarks he must be regarded as culpable for them.

The zealous acrimony expressed by these puritanical louts is almost as funny as the video. They clearly have a hard time discerning the difference between comedy and reality. And that may explain why they are unable to see the humor in this video but they can take Mitt Romney seriously.

ADDENDUM: For an idea of what the Fox News crowd thinks is funny, note this item posted on Fox Nation: 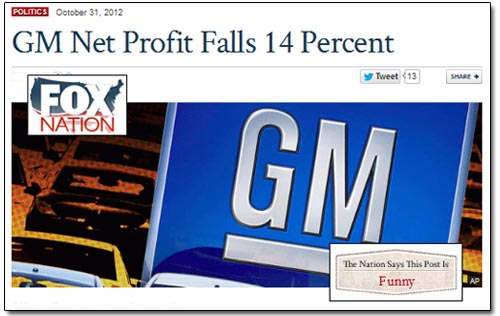 The rating given to this article by the Fox Nationalists is “Funny.” Apparently they regard bad news for American businesses and workers as a joke. These cretins actually celebrate the hardships of fellow citizens. For the record, Fox failed to note that GM’s earnings statement was actually better than analysts expected and the stock rose almost 10% after the release. It was an indication of an improving economy. But that didn’t stop Fox from latching on to what they could spin as bad news and lifting the hearts of their America-hating audience.