That’s right! Glenn Beck is the worst program on cable news. And while the quality of the program, or lack thereof, has certainly earned Beck the award for garbage-caster of the year, that isn’t what I’m talking about today. It’s Beck’s ratings for the month of May 2008, that confirm his place at rock bottom of the prime time cable news pile. One would have to wonder why CNN sticks with Beck who presides over the lowest rated program at any time, on any network, during prime time. 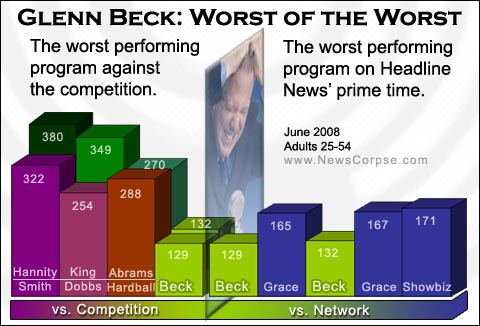 This is nothing new for Beck, whose program has been a perennial loser. The results of the May survey affirm the continuing lackluster performance evident in previous periods. They are so similar to those from last November, that I could just cut and paste the analysis and commentary I posted at that time and it would describe the more recent results perfectly. In fact, I think I will…

When CNN announced the hiring of radio talk jock Glenn Beck almost two years ago, they used words like “cordial,” “conversational” and “not confrontational” to describe him. What they delivered was the polar opposite of that, as has been well documented by Media Matters. Despite CNN’s laughable depiction of Beck as “Miss Congeniality,” they knew exactly the sort of piffle they were peddling. Their programming strategy stated at the time was to…

“…build Beck into the type of TV personality that could siphon viewers from Bill O’Reilly, Joe Scarborough and other conservative hosts.”

Beck’s ratings for May 2008 (25-54 demo) reveal a program on life support. At this point the humane thing to do would be to pull the plug and put Beck (and innocent TV viewers) out of their misery. As shown above, Beck loses to all of his competitors in cable news. Both his live show and his repeat come in 4th out of four programs. But that’s not the end of his problems. While Beck is unable to challenge his competition, he is also the weakest link on his own network. The two lowest rated hours on Headline News belong to Beck. He is a TV anchor who is performing like a ship’s anchor and weighing down the network’s line-up.

So what is CNN waiting for? Are they masochistic gluttons for punishment who get pleasure from losing? Are they married to the repulsive and repudiated ideology spewed by Beck? Are they frightened, ineffectual, corporate bootlickers who couldn’t make a proper programming decision without a sackful of surveys and permission from their supervisor? It is just this simple: There is no business case for keeping Beck on the air. His program is a money pit and it’s fiscally harmful to the programs adjacent to it and, therefore, the network as a whole.

The only reason to give Beck a stay of execution would be fealty to the brand of caveman conservatism that he espouses. If CNN doesn’t cancel this stinker they will have settled, once and for all, the speculation as to whether they are a compromised media lapdog with an agenda aimed at placating the powerful and debasing journalism.

Returning to the present…A lot has happened in the past few months in Cable Newsland. Most notably the rise of MSNBC, which has more than doubled its viewers year over year, while the other nets struggled to remain even or showed small gains. Programming changes at MSNBC included the cancellation of Tucker Carlson, who was replaced by David Gregory’s Race to the White House. Gregory has significantly improved the time period he took over. The same is true for Keith Olbermann’s Countdown, which added a replay in place of one of the Doc Block hours.

While these networks are altering their fare, the only things CNN has done is move Lou Dobbs an hour later and swap Paula Zahn for Campbell Brown (Republican operative Dan Senor’s wife). Perhaps this would be a good time to reevaluate their strategy. Perhaps it might benefit the network, and its viewers, if they dumped the dead weight and showed some real diversity. Maybe they could recognize where the growth is in this market and consider giving someone like Ed Schultz, Randi Rhodes, Thom Hartmann, Rachel Maddow, Stephanie Miller, Sam Seder, Jim Hightower, Laura Flanders, Harry Shearer, or any other of the many distinguished progressive commentators, a chance to show what they can do in Beck’s time slot. They could even draft their own Jack Cafferty who has developed a cult following on The Situation Room with Wolf Blitzer. Anyone but Beck!