Monitoring right-wing media is a full time job that offers innumerable opportunities to expose blatantly dishonest bias and manipulation. But sometimes you encounter something so monumentally stupid that it defies adjectives sufficient to express the depths of depravity to which these cretins will sink. And when that happens it is usually something produced by NewsBusters (and disseminated by Fox News). 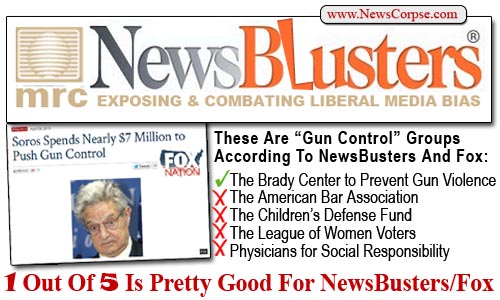 The conservative obsession with portraying billionaire philanthropist George Soros as an omnipotent overlord of every liberal activity would be comical were it not for the fact that it reveals an acute psychosis on the part of those afflicted. NewsBuster Liz Thatcher is one of the sufferers as indicated in her posting titled “Soros Spends Nearly $7 Million to Push Gun Control.”

The article lists five groups to which Thatcher alleges Soros has made donations. Of course, it could simply be that some organization that received funds from Soros subsequently donated to the groups without his knowledge (which occurs often), but right-wingers consider that the same as if Soros donated to them personally.

However, the real disconnect from reality here is the definition that NewsBusters applies to a “gun control” group. These are the five entities cited in Thatcher’s article:

Any mentally coherent person would quickly recognize that there is only one group in that list that is affiliated with gun safety and regulation. The others may have expressed an opinion on the issue, but it is obviously not their core mission and most of their activities and expenditures are spent on other matters.

What’s more, of the $7 million that NewsBusters is so disturbed by, only $50,000 went to the Brady Center. The largest chunk ($4 million) was donated to the American Bar Association, which certainly has a busy agenda concentrated on other totally unrelated issues. Apparently NewsBusters realized that a measly 50k was not enough for a good Soros bashing, so they scoured his extraordinarily generous records of philanthropy for eleven years in order to artificially inflate the dollar amount that they could falsely connect to gun safety issues.

This indicates how desperately fixated NewsBusters is on disparaging Soros and gun safety advocates. But, sadly, it also reveals how pitifully idiotic the right can be when their phobias and fetishes outflank their ability to twist the facts to fit their preconceived positions.