The persistent bigotry of Fox News has once again burst into the open with their publication of an Associated Press article that they altered in a manner that totally changes the meaning in a most offensive way.

The article written by the AP’s Judy Lin was distributed with a headline that read “California Bill Would Let Non-Citizens Serve On Juries.” Lin wrote that…

“The California Assembly passed a bill on Thursday that would make the state the first in the nation to allow non-citizens who are in the country legally to serve on jury duty.

It does not change other criteria for being eligible to serve on a jury, such as being at least 18, living in the county that is making the summons, and being proficient in English.”

The AP article addresses the subject in a fair and balanced way. It notes the objections of Republican opponents who assert that there is no shortage of available jurors. It also reports the claims by Democratic supporters that jury selection is hampered by the reluctance of many to serve. In addition, Lin notes that current law does not require citizenship for either lawyers or judges.

Fox News, however, was not satisfied with the neutral tone of the article and re-wrote the headline to assert something that is utterly false: “California bill would let illegal immigrants serve on juries.” Not only is it untrue that anyone in the country illegally would be permitted by this legislation to sit on a jury, the first paragraph of the story as published by Fox refutes the lie in their headline. 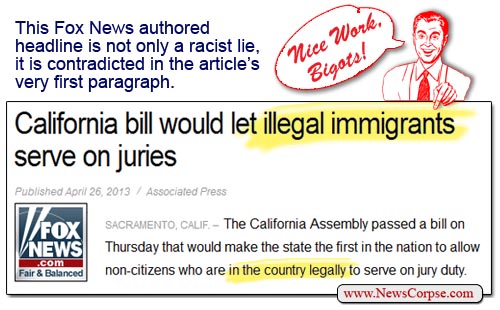 In their feverish rush to demonize even legal immigrants, Fox failed to notice the obvious discrepancy between their headline and the content of the article. They were so preoccupied with advancing their prejudices that they inserted the offensive phrase “illegal immigrant” (a phrase that the AP itself has officially abandoned) despite the fact that it misrepresents the legislation as drafted.

This perversion of journalistic ethics was so severe that even the lie-riddled Fox Nation did not resort to it. And on Fox News Latino (where the phrase “illegal immigrant” has also been nixed) the very same AP article was published in Spanish with the accurate headline from the original AP story.

It was only Fox News that re-wrote the headline to assert something that was both offensive and false. And they did so while attributing the story to the AP without disclosing the alterations they made. It’s bad enough that Fox routinely pursues a conservative GOP agenda, but for them to go this far out of their way to promote a racist lie violates every professional standard of journalism and exposes their hateful and rancid bias.