Last week was a difficult one for many Americans, and particularly those close to music legend Aretha Franklin and senate icon John McCain. The media was more consumed with funerals than at any other time in recent memory. And, sadly, the services for these deceased notables were exploited for political gain by media cretins like Fox News who seem to have forgotten how to show respect for the families of the fallen. 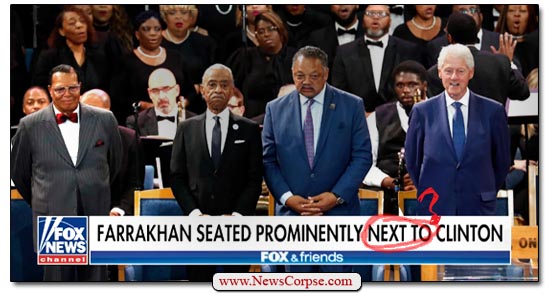 However, the passage of time over the weekend did nothing to temper the madness at Fox News. They must be getting pretty desperate for disparaging material to throw at their political enemies, because the latest assault really scrapes the bottom of the barrel.

In a segment on Fox and Friends (video below), the “Curvy Couch” potatoes served up a story that criticized President Bill Clinton for his attendance at Aretha Franklin’s funeral. The objection they had was that he was seated near Minister Louis Farrakhan of the Nation of Islam. Farrakhan is unarguably a repugnant bigot who has been inciting racial and religious hatred for decades. It was surprising to see him at the service for a woman known for her support of civil rights and her closeness to Rev. Martin Luther King Jr.

But for Fox News to make an issue of the seating arrangements is ludicrous. The intro to the segment had co-host Ed Henry saying that “The very controversial Nation of Islam leader who has notoriously declared that ‘Jews are my enemy’ and ‘white folks are going down,’ was seated prominently alongside former President Bill Clinton.” In fact, there were several references to Clinton sitting next to Farrakhan. But that’s a lie. Al Sharpton and Jesse Jackson were separating Clinton from Farrakhan.

More to the point, Clinton had nothing to do with the seating arrangements. He likely didn’t know who else was attending or where they would be seated. Does Fox News think that Clinton should have stood up and stomped out of Franklin’s funeral after spotting Farrakhan in the crowd? Apparently so. They even brought in Alan Dershowitz to suggest that option. And co-host Pete Hegseth was aghast at the lack of media whining about this scandalous chair affair, saying “What about the question to the elites of our country? This is not a story? They’re not blinking an eye.”

Of course, the reason the press isn’t blinking is because, in fact, it isn’t a story to anyone but the craven loons at Fox News who are grasping at straws to denigrate Clinton and any other Democrat that they happen to bump into. They previously faulted Clinton for looking in the direction of Ariana Grande when she was singing. Which is something that humans do while entertainers are performing. They also complained bitterly about the eulogies at both funerals when they thought expressions of unity, civility, and respect were attacks on Donald Trump. Now why do you suppose they thought that? Perhaps because he is anathema to those honorable personality traits?

It’s noteworthy that while America was mourning, Trump was golfing and tweeting. Maybe he DM’d his BFF Vladimir Putin. And what’s really worse: Clinton sitting near, but not speaking to, Farrakhan, or Trump lavishing effusive praise on, and doing the bidding of the murderous dictator and enemy of America, Putin?

During a heated discussion with Barack Obama’s communication director, Robert Gibbs, Sean Hannity blurted out the names of controversial figures that he said have been guests on his show. He was defending himself from Gibbs’ assertion that basing an entire episode of his Hannity’s America on the commentary of noted anti-Semite Andy Martin could tag Hannity as an anti-Semite himself. Gibbs was actually just attempting to demonstrate that such guilt by association is not a valid strategy for debate.

One of the names Hannity listed in his defense was Khalid Mohammad. Was this the same Mohammad that was Osama Bin Laden’s propaganda chief? He is presently a prisoner at Guantanamo Bay and is considered one of the highest profile Al Qaeda leaders yet captured. The 9/11 Commission described him as “the principal architect of the 9/11 attacks,” and he has reportedly confessed that he had personally decapitated the American journalist, Daniel Pearl.

Hannity may have been referring to another Khalid Mohammad who was the national spokesman for Louis Farrakhan’s Nation of Islam (NOI). He is hardly a less controversial character. This Mohammad referred to Jews as bloodsuckers and was dismissed from the NOI for being too radical (for the NOI?). In February 1994, Congress issued a denunciation of Muhammad, condemning his speech as “outrageous hatemongering of the most vicious and vile kind.” He died in 2001 of a brain aneurysm, so if Hannity had him on his show it was at least seven years ago.

It would be interesting to find out to whom Hannity was referring. But either way Hannity admits that he pals around with some unsavory folks. He surely has no business criticizing Barack Obama.