There is a heaping helping of chutzpah among the propaganda purveyors at Fox News. It isn’t just their shameless propagation of lies and right-wing conspiracy theories. It’s how arrogantly they present the phony tales of Democratic misconduct, while pretending that Trump and his Republican confederates are as pure as the driven snow.

On Friday’s episode of The Five on Fox News, co-host Dagen McDowell introduced a segment on the already aging story of Hunter Biden selling his artwork for surprisingly large sums. It’s a subject that they are obsessed with, having covered it just last month with their customary focus on lies, rumors, and baseless innuendo. But apparently that didn’t satisfy the Fivers.

The difference this time was that the panel was joined by Jessica Tarlov, who took exception to the hypocritical harangues of her co-hosts. Tarlov eventually found an opening to say that…

“We cannot have this conversation and completely ignore the fact that Trump children, Ivanka and Jared, according to Citizens for Ethics Investigations, made hundreds of millions of dollars while they were serving in government posts.”

At which point Jesse Watters prepared to make the first of multiple interruptions to prevent Tarlov from finishing her point. But she persisted…

“No Jesse, don’t put your hands up. She got dozens of trademarks, including three preliminary trademarks that she campaigned for at Mar-a -Lago.”

Jessica: We cannot have this conversation and completely ignore the fact that Trump children, Ivanka and Jared… made hundreds of millions of dollars while they were serving in government posts pic.twitter.com/FeWwmaNDMs

Watching Tarlov so righteously condemn the Trump family for their sleazy self-dealing was a rare spectacle on Fox News. She pointed out that Jared and Ivanka’s misconduct occurred while they held official White House posts. Hunter Biden, on the other hand, is a private citizen with no political sway and is entitled to pursue whatever career he chooses. It was predictable that this sort of honesty on Fox would not be permitted for very long.

As expected, McDowell quickly broke in to say that “We’ve gotta go.” But Tarlov was heated up and unstoppable. She continued while the other co-hosts talked over her, hoping to silence this unauthorized truth-telling. Co-host Katie Pavlich had the audacity to accuse Tarlov of “deflecting” when that’s all that the other co-hosts were doing from the moment she began talking.

In fact, the entire segment was a deflection from the corruption that was rampant in Donald Trump’s administration. Just this week Tom Barrack, a close ally of Trump, who chaired his inauguration committee, was arrested on charges of breaching the Foreign Agents Registration Act. He was indicted for lobbying Trump on behalf of the United Arab Emirates while Trump was running for and serving as president. And there were at least ten other felony indictments of Trump associates during his single term in office.

Fox News has also refused to report on Trump’s brazen profiteering while president, including charging taxpayers for accommodations at his hotels and golf resorts for family, staff, members of Congress, Secret Service, political organizations, and yes, even foreign operatives with business before the U.S. government. And Fox has failed to cover Trump ripping off his donors to line his own pockets.

So despite the fact that Trump has largely abandoned Fox News due to his impression that they haven’t been sufficiently worshipful, Fox continues to purse their lips and kiss his … let’s say ring. Consequently, it will be interesting to see if a disobedient liberal like Tarlov still has a job with Fox tomorrow.

In recent weeks the Delta variant of COVID-19 has spread rapidly through communities of unvaccinated Americans. That means, of course, that mostly red state and Republican areas are suffering the worst of the viral spike. Consequently, there has been some significant movement among some conservative politicians and pundits who were previously loathe to make any positive comments about vaccines or the benefits of getting vaccinated. 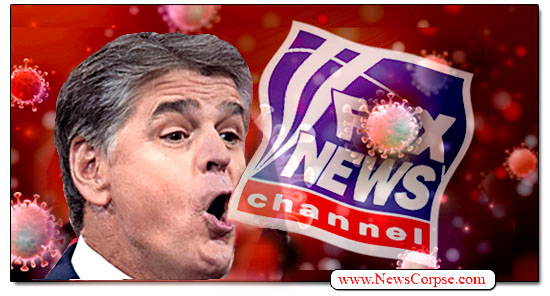 Among those who were praised in the press was Sean Hannity of Fox News. Earlier this week Hannity told his vaccine-hesitant viewers to “Please take COVID seriously. I can’t say it enough. Enough people have died.” It wasn’t actually a call to get vaccinated. It was more like a legal disclaimer to do research and make your own decision. Which is a position that would make Captain Obvious blush as being way too apparent to anyone with a pulse.

Setting aside the undeserved credit Hannity received, he affirmed his stance against the benefits of getting vaccinated in a segment on Thursday night. Hannity delivered an extended refutation of the media reports that he previously might have said something marginally intelligent and responsible about vaccines. He certainly couldn’t let that stand. So he devoted a couple of minutes to denying that he ever did something so ludicrous as to advocate on behalf of preventing people from suffering long and painful illness and death.

The fact that Hannity felt it necessary to make absolutely sure that no one thought he would ever stoop to recommending a life-saving vaccine tells you just how committed he is to perpetuating the pandemic, and how afraid he is of alienating his anti-vax audience. He said that…

“I never told anyone to get a vaccine. I’ve been very clear. I am simply not qualified. I’m not a medical doctor. I know nothing about your medical history or your current medical condition. I think it’s inappropriate for me to do so.”

imagine the choices you have to make In life to find yourself pleading, begging a national television audience at the end of a pandemic to not believe reports that you recommended the life-saving vaccine that you definitely took. pathetic. pic.twitter.com/YvbPWfGf1I

How thoughtful of Hannity to clear that up. We wouldn’t want anyone to mistakenly believe that he cared about the public welfare. But even more helpful was his admission that “I am simply not qualified.” That’s objectively true. However, it’s an admission that doesn’t apply to just his medical credentials, or lack thereof. Hannity also has no qualifications for any of the subjects he pontificates on nightly. He’s a college dropout who rose through the ranks of radio shock jocks to land a spot on Fox “News.” He isn’t an expert on economics, or the military, or health insurance, or climate science, or government ideology, or education, or immigration, or labor, or last but not least, journalism.

Nevertheless, Hannity gives extraordinarily half-baked (if that) advice on all of those matters. and all of his ill advice comes with blatantly biased, ultra-rightist slants. More often than not his advice consists merely of infantile insults aimed at Democrats, liberals, and other ideological foes.

What’s more, Hannity’s COVID coverage surely had an impact on his Republican audience. A recent Washington Post/ABC News poll found that “Ninety-three percent of Democrats say they either have been vaccinated or definitely or probably will do so; that plummets to 49% of Republicans.”

So while about half of the Republicans who are likely Fox News viewers remain opposed to getting vaccinated, and thus, susceptible to getting infected, Hannity felt compelled to assure everyone that he isn’t advocating vaccinations for anyone. And that’s based on his being unqualified to have an opinion, which is, in point of fact, an opinion.

But if he’s going to bother bringing up the issue on his program, he surely knows that he could book an actual expert and let that person advocate for getting the shot. However, that would require Hannity caring about people, rather than just image and ratings and Trump love.