A couple of months ago, Pope Francis delivered an exhortation on the state of global poverty and society’s response to it. It was a rather profound critique of the conservative economic principles that have been the central political focus of the Tea Party and its Republican benefactors. Ever since, right-wingers from Sarah Palin to Rush Limbaugh have walked the tightrope of respecting the Pontiff while blasting his guidance as extreme liberalism and pure Marxism.

New year’s resolution: Get the acclaimed ebook Fox Nation vs. Reality at Amazon!

Now Bill O’Reilly has joined the fray with another of his Talking Points Memos that articulate his notoriously vapid opinions on whatever is irking him that day. He titles this one “The Pope, Capitalism, And The Far Left.” It started out as a rebuke of lefty pundits who have embraced the Pope’s call for income equality. O’Reilly accuses the left of distorting the words of the Pope, but he doesn’t provide a single example of any such distortion. Not one. He does, however, leave out numerous excerpts from the Pope’s writings that explicitly condemn conservative economics like the “trickle-down theory” and advocate on behalf of the poor. For instance:

“[S]ome people continue to defend trickle-down theories which assume that economic growth, encouraged by a free market, will inevitably succeed in bringing about greater justice and inclusiveness in the world. This opinion, which has never been confirmed by the facts, expresses a crude and naïve trust in the goodness of those wielding economic power and in the sacralized workings of the prevailing economic system. Meanwhile, the excluded are still waiting.” […and…] “It is vital that government leaders and financial leaders take heed and broaden their horizons, working to ensure that all citizens have dignified work, education and healthcare.”

O’Reilly further declares that “I can tell you with certainty that the Pope opposes” economic justice, which O’Reilly recasts as socialism. From whence he gets his certainty is unexplained. It certainly is not from the Pope’s own words that include…

“[N]one of us can think we are exempt from concern for the poor and for social justice.” […and…] “We can no longer trust in the unseen forces and the invisible hand of the market. Growth in justice requires more than economic growth,” he said, adding that it requires “processes specifically geared to a better distribution of income.”

The Pope is using very specific and carefully chosen language that demolishes any hope of right-wingers dismissing his meaning. “Social justice” and “distribution of income,” phrases the right has tried feverishly to demonize, are not accidental rhetorical flourishes on the part of the Pope. Nor is it accidental when O’Reilly, nevertheless, dismisses the Pope with hollow posturing by saying that the left “want to impose a nanny-state that redistributes income,” or that “The left doesn’t care about the facts. It’s all about hating America.”

When it comes to hate, O’Reilly has a distinct advantage. Aside from having an academic study prove that he uses derogatory names on his program once every 6.8 seconds, he took this latest opportunity to harshly disparage the people about whom the Pope was talking. O’Reilly assigned blame for the tribulations of the poor only on their own alleged shortcomings, asserting that they refuse to “work hard, be honest, stay sober, and get educated.” He would never acknowledge the responsibility of the government’s institutional bias in favor of wealthy elites for the economic imbalance that clamps down on society’s less fortunate. It’s far easier for those in O’Reilly’s social strata to insult the poor as lazy, lying, drunken, illiterates. 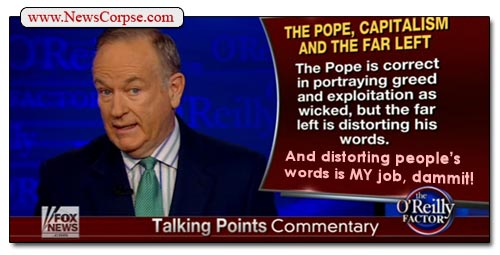 If O’Reilly actually believed that the left was distorting the Pope’s words, he would have provided an example. Instead he made a blind allegation that he never bothered to support, all the while ignoring the fact that the Pope’s words were not ambiguous in their contempt for compassionless elitists like O’Reilly. It’s an indication of just how desperate the right is to pretend they have a moral alliance with the Pope when, in reality, they are scrambling to avoid any remotely honest discourse about the income inequality that Pope Francis spoke about so eloquently.

10 thoughts on “Father Bill O’Reilly’s Execrable Exhortation On The Pope, Capitalism, And The Far Left”