When you preside over a political party that is the subject of frequent criticism for the racist rhetoric of its members and supporters, it might be a good idea to avoid bringing attention to that gaping wound of oozing hatred. But never let it be said that the leaders of the GOP are capable of recognizing a good idea.

The chairman of the Republican National Committee, Reince Priebus, went berserk today over a tweet by some anonymous social media intern at MSNBC. The comment that so furiously enraged him was a reference to a commercial for Cheerios that features a biracial family (video below). It is a sequel of sorts to a similar ad that played last year. Here is the offending tweet:

Maybe the rightwing will hate it, but everyone else will go aww: the adorable new #Cheerios ad w/ bi-racial family. http://t.co/SpB4rQDoAR

That was all it took to send Priebus into a frenzy over what he perceived as a deplorable insult directed at innocent right-wingers. His response was to announce that he would order a boycott of MSNBC unless its president, Phil Griffin, made a personal and public apology. He sent letters to Griffin as well as an open letter to “all Republican elected officials, strategists, surrogates, and pundits,” that said that he was “banning all RNC staff from appearing on, associating with, or booking any RNC surrogates on MSNBC,” and asking anyone affiliated with the GOP to join the embargo. 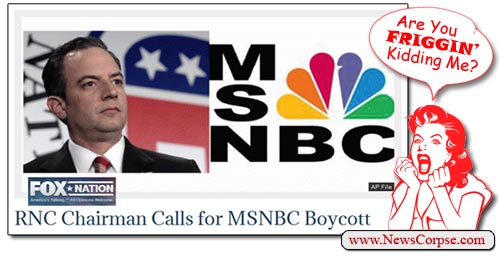 And of course Fox Nation made this their top story.
Read Fox Nation vs. Reality for more tales from the loony side.

First of all, how would anyone know that a boycott had been initiated by the GOP against MSNBC? Most Republicans already refuse to go on the network simply because they know they will be challenged when they lie, unlike the friendly reception they get at Fox. But for the RNC chair to feign outrage over such a trivial tweet defies reason. The message conveyed by the tweet was simply that this heart-warming advertisement was likely to irk many conservatives whose intolerance for diversity is well documented. And where would the tweeter get an idea like that? Perhaps from the response that followed the release of the first Cheerios ad with the same biracial family. As reported at the time…

“A new Cheerios commercial that included an interracial family drew so many racially motivated hate comments on YouTube that the video-sharing website shut down the commercial’s comment section. […] some of the comments made reference to Nazis, ‘troglodytes’ and ‘racial genocide.'”

With that historical perspective, why would anyone doubt that the same right-wingers who spewed such vile hatred at the ad’s charming family last year, would react any differently today? Conservatives who are offended by the tweet ought to look at their own confederates to understand why everyone else regards them as hardened bigots who would hate the Cheerios ad. It isn’t MSNBC’s fault that conservatives openly express themselves in such a thoroughly reprehensible manner. However, the behavior of the rightists when this ad’s first installment was aired justifies the sentiment in the tweet. For some additional evidence of the unbridled bigotry on the right, have a look at…

The notion that MSNBC would be a target of a boycott simply because they recognized the bigotry that is inbred into much of the American conservative movement is especially ironic when you consider that Fox News, the mouthpiece of the rightist agenda in the media, is so brazenly racist. It’s a network that regularly demonizes minorities as criminals or moochers. What’s more, Fox feverishly advocates public policies that are detrimental to minorities, such as voter suppression laws and slashing benefits for low income workers. If any news outlet should be boycotted for insulting broad swaths of the American public it should be Fox

Which brings us to the subject of hypocrisy by the infuriated right. There actually have been efforts to embargo Fox News and persuade Democrats to avoid appearing on the network. During the Democratic primaries in 2008, the Congressional Black Caucus successfully shut down a Nevada debate that was to be broadcast on Fox. The response by Republicans was that the Democrats were either misguided or cowards, and would be afraid to face our enemies if they couldn’t face Fox. Fox anchor Chris Wallace said that “the Democrats are damn fools [for] not coming on Fox News.” Do these criticisms now apply to the boycotters of MSNBC?

This isn’t even the first time that Priebus has floated the boycott balloon. Just last year he sent similar threatening letters to NBC and CNN because they had plans to produce films about Hillary Clinton. However, he didn’t make the same threat to Fox, who also had Hillary projects in the pipeline. It seems that Priebus is just itching for a boycott, unless the offender is his PR department (aka Fox News).

The pitiful part of this story is that MSNBC has already caved in to the demand for an apology. Phil Griffin issued a statement calling the tweet “outrageous and unacceptable,” which it certainly was not. Even worse, he said that he had “dismissed the person responsible.” That is a monumental injustice and overreaction. This merely proves that the network that conservatives like to demean as unfailingly liberal is just a facade that will collapse at the slightest whiff of controversy. It’s why MSNBC issues apologies every other week and fires people for little reason.

Fox News, on the other hand, is far worse when it comes to offending liberals and Democrats, but they will never apologize, nor do they correct their many “errors” of fact. But if MSNBC keeps bowing down to competitors who seek its destruction, they will remain a perennial loser and shed any credibility they hope to maintain. This silly boycott threat should be cause for celebration by MSNBC. It serves as an opportunity to remind people of why Republicans are correctly perceived to be racist. It relieves them of the burden of making excuses for why the GOP is not represented on the channel. And it allows them to focus on expanding their audience among the key demographics that are most likely to tune in.

What this all comes down to is that Priebus is throwing a tantrum to attract attention and donations. The tweet that started the whole thing was provocative, but perfectly justified. But that doesn’t stop the disingenuous onslaught of phony rage that turns into a ludicrous threat that no one will notice should it be carried out. We are witnessing a drama that is more painfully shallow than the typical reality TV tripe that consumes way too many hours of broadcast time. And, sadly, “Keeping Up With The Republicans” has even less reality in it than you’ll find over at the Kardashians place.

[Update: 1/31/2014] Fox News is cashing in on this controversy. So far they have featured it on The Five, Fox & Friends, and the Kelly File. Greg Gutfeld of The Five injected the mandatory Nazi reference by calling MSNBC a “one-stop shop for master-race-baiting.” And Megyn Kelly asserted that liberals have a “kneejerk instinct to accuse conservatives of racism.” In her segment that featured uber-rightist flame-thrower Brent Bozell, she went on to say…

“They [liberals] saw this ad and said, ‘Oh the conservatives will hate it because it’s a black man and a white woman together in a family.’“

Wrong Megyn. They said “Oh the conservatives will hate it because that’s exactly the response they had to it when the first version of it came out last year.” What better evidence can you have of how someone will respond to something than their own prior response?

And this morning Fox’s media analyst, Howard Kurtz, called the MSNBC tweet “an outrageous and really disgusting message,” before excreting this BS:

“You do have to wonder about the culture there, and whether there is such a loathing for conservatives that things that are so clearly way, way, way over the line are somehow deemed acceptable.”

Once again I have to say ARE YOU FRIGGIN’ KIDDING ME? The outpouring of loathing by Fox of liberals (and African-Americans, and Latinos, and gays, and women, and the poor) is a daily – even hourly – occurrence. For Kurtz to say that with a straight face is proof of his total devotion to the dishonest promulgation of Fox’s propaganda, hate, and commitment to the corporatocracy they were invented to defend.

12 thoughts on “Republicans, Racists, And Boycotts, Oh My: And Why MSNBC Should Be Celebrating”