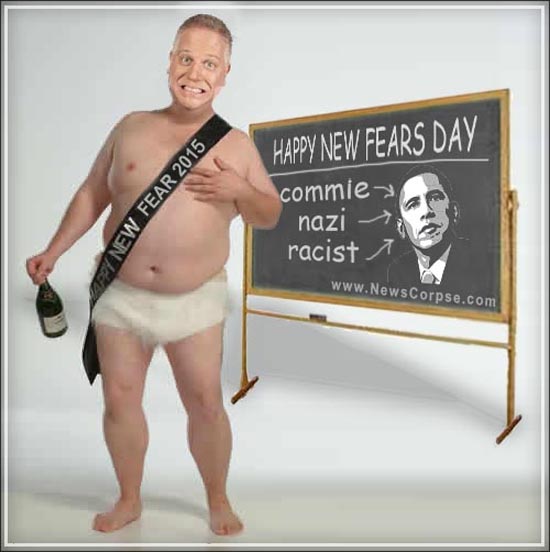 If there is one word that summarizes the media take on life in America for 2014 it is FEAR! Nothing was spread thicker than the notion that we are all living on borrowed time as some looming threat hangs precariously over our heads. Here is a brief retrospective of some of the frightening scenarios that haunted us over the past year and that were feverishly promoted by right-wing media.

The Chairman of the Panic Caucus has got to be South Carolina’s GOP Senator Lindsey Graham who warned Fox News that “This president needs to rise to the occasion before we all get killed back here at home.” Of course, Graham never specified how this national massacre would be carried out, nor what Obama should do about it. But never mind that. Just get back in your bunker and try to tune in Alex Jones on your ham radio.

On an episode of Fox News’s “Bulls and Bears,” host Brenda Buttner introduced a segment warning about “the ISIS border threat we may all regret if we don’t stop it now.” But Stealing the thunder of prominent members of the Psycho-Chicken Little Society was Fox regular Tracy Byrnes. Her hysterical assessment that ISIS is already here led to a pronouncement that terrorists will “infiltrate the minds of children and […] so many of these kids are trained to hate us and potentially kill us.” So if you know what’s good for you, you will start knocking off any unfamiliar children in your neighborhood before they get you.

Dick Cheney, (News Corpse’s Dick of the Year) has once again made news with his unrelentingly pessimistic vision for America. Emerging from his bunker in an undisclosed location in order to raise money for his new SuperPAC, Cheney joined the Curvy Couch Potatoes on Fox & Friends to warn Americans that “there will be another attack. And the next time, it’s likely to be far deadlier than the last one.” Fox’s Steve Doocy agreed with Cheney and elaborated saying that “in a couple of months one of them [terrorists] could be walking in front of our building with some sort of gizmo to wreak havoc.” So all along it is Fox News that has been the target of the terrorists.

A Ton of ObamaCare Navigators Are Criminals

Over at Fox Nation, they posted an item culled from the ultra-conservative National Review Online that alleged that people recruited to assist citizens with ObamaCare enrollments are a “fishy” and unsavory collection of outlaws. And except for the fact that the evidence they cite doesn’t corroborate their claim, it’s pretty scary narrative. The truth is that by portraying ObamaCare as a thinly-veiled assembly of hustlers just waiting to exploit innocent health insurance consumers, Fox is just continuing their “Fright Offensive” to scare people away from exploring the many benefits of the program and, thus, doom it to failure.

One of the most over-hyped pseudo-threats of the year was the one alleging that Ebola would decimate America. PolitiFact named the phony crisis their “Lie of the Year.” Expanding on that fallacy, Fox News is among the many media outlets who attempted to unduly frighten the American people by speculating that terrorists are going to embrace Ebola as a mechanism for their homicidal escapades. Of course, anyone with any knowledge of biology is aware that Ebola would be an awful candidate for weaponized bioterror. What’s more, immediately after the election on November 4th, the Ebola pandemic was miraculously cured.

And closing on a more bizarre note, it should surprise no one that Fox News broadcast a story that is nothing more than a hoax perpetrated by wingnut bloggers and a coalition of disreputable pseudo-news sources. But Fox’s Jon Scott was not deterred by those facts as he introduced the segment saying…

“A potentially terrifying scenario is playing out as we approach September 11. Nearly a dozen airplanes are missing – flat out missing – from an airport in Tripoli, raising new fears of the possibility of another terror attack from the air.”

In reality every allegedly missing plane was accounted for and all credible sources repudiated the claims. For this completely made up story Fox News relied on the reporting of the Washington Free Beacon, an ultra-rightist conspiracy theory disseminator that is affiliated with Republican operatives and the Koch brothers. And even after the story was thoroughly debunked, Fox never issued a retraction.

One thing is abundantly clear from the editorial tenor of Fox and other media outlets: Fear was the main product of the media in 2014. There is an obvious effort to keep the American people in a constant state of the shivers. Either that or the media has simply determined that horror programming is the path to higher ratings. In any case they are behaving irresponsibly and have something in common with our foreign enemies. They are, by definition, terrorists:

Terrorism (ter-uh-riz-uh m): noun – The use of violence and threats to intimidate or coerce, especially for political purposes. [See Fox News]

And HAPPY NEW YEAR everybody!