In a year that was filled to the brim with monumental idiocies, the competition for King of the Dumfux is stiffer than usual. Narrowing down the list of those deserving of special recognition was particularly difficult, but the collection below is a pretty good indication that DEVO was right and that civilization is taking huge leaps backwards. So fasten your neck bolts and let your eyes glaze over as we journey back through a year of hilarious (and frightening) intellectual vacancy. 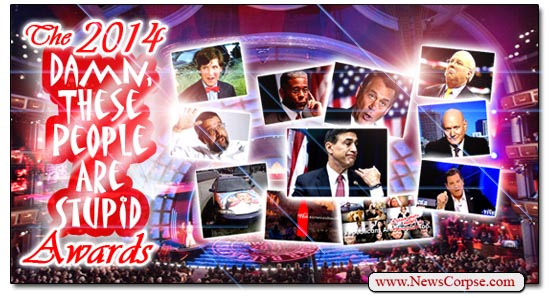 The “Is Our Children Learning” Award

Leading off the ceremony is a Hall of Famer dolt, Fox News’s Tucker Carlson, who laments that “the problem with American schools is just that kids are…learning too much.” That’s the sort of thinking that makes every other item on this list possible. It is also a recipe for growing new Fox News viewers who appreciate the stupidity of people like Carlson.

An let’s also give Carlson an honorary mention for his screed on “The Wussification Of Popeye.”

The “Speak For Yourself, Douchebag” Award

Former CIA “intelligence” officer, Michael Scheuer, is a regular guest on Fox News. He is famous for telling Glenn Beck that “the only chance we have as a country right now is for Osama bin Laden to deploy and detonate a major weapon in the United States.” But earlier this year in an interview with Neil Cavuto, Scheuer made a surprising distinction between America and the terrorist ISIS operation saying that the Islamists “are not dumb people. They may be brutal, but they are not dumb. We’re the dumb ones.”

Well then, that settles it. The problem we’ve been having all along is that we’re just not as smart as our adversaries. And Cavuto, notably, did not challenge that assessment. After all, how can a bunch of hillbillies who are hypnotized by reality television, designer jeans, and flame-broiled Whoppers supposed to be able to compete intellectually with such sophisticated and sociologically advanced opponents? Why did we not see this deficiency before Scheuer brought it to our attention? Oh yeah, because we’re stupid.

The lazy-brained right-wing media pounced on a scandalous story about President Obama’s bill to give welfare recipients free cars. And except for the fact that the story was the product of a satirical website, it would have been a great scoop. What makes it worse is that they did same thing the year before and were mercilessly shamed for their idiocy, but that didn’t prevent them from doing it again this year.

After complaining about a Coca Cola ad that celebrated the diversity of the nation by singing the anthem “America the Beautiful” in several languages, the wingnuts at Breitbart News declared victory when Coke modified the ad by placing the motto “E Pluribus Unum” at the beginning. So let’s get this straight. Coke, they said, “bowed to conservative critics” who insist on English-only by inserting a short phrase in — Latin. Uhhh, OK.

The “Your Wife Is A Fat Fatty” Award

No list of stupidity would be complete without the ravings of Fox’s “psycho” analyst Keith Ablow. There are numerous entries under his name for recognition, but we’ll just settle on one that is both dumb and insulting. While visiting with the women of Fox’s Outnumbered, Ablow dispensed his routine Obama-hating rhetoric, but then added a bit of spice just for this program. As a slap at First Lady Michele Obama, who has been a devoted advocate of healthy diets, Ablow questioned her sincerity by smugly barking “How well can she be eating. She needs to drop a few.” This bit of misogyny even elicited gasps from the conservative ladies of Fox.

The “Republicans Are People Too” Award

In 2014 the Republican Party took on a public relations task that dwarfs all other efforts at opinion-making. They boldly aimed to convince the American people that Republicans are people too. And the method used to achieve this goal was to produce a video that consisted of a montage of stock photos labeled as “average” American Republicans. So the video produced in order to convince everyone that Republicans are real people is populated by fakes. Brilliant.

The “Blind Leading the Old and Stale” Award

Once known as “Bush’s Brain,” Karl Rove has deteriorated into a mentally deficient spewer of rancid rightist partisanship. In an attempt to bash Hillary Clinton, Rove’s wild pitch beaned every senior citizen in the country when he said that “In American politics, there’s a sense you want to be new, you don’t want to be too familiar, you want to be something fresh, you don’t want to be something old and stale.” Never mind that almost every Republican Rove backed for the past thirty years was older or staler than Clinton. The real numbskullery of Rove is that he is insulting the nation’s most reliable voting bloc by implying that they are not fit for public service.

The “Hate Of The Union Address” Award

There is boomlet of commentary on the right that thinks it would be a good idea to prohibit President Obama from delivering the annual State of the Union address to members of Congress. This is a proposal that reeks of personal animosity and is wholly inconsistent with the mission of Congress. What’s more, it certainly doesn’t advance the spirit of cooperation that the GOP pretended to embrace following the midterm election. Speaker Boehner has already nixed this notion, but merely considering it hangs an “i’m a stupid baby” sign around the necks of these cretins.

The “Boobs On The Air” Award

Following reports of a female fighter pilot from the United Arab Emirates who led the UAE’s forces in attacks on ISIL, Fox News host Eric Bolling made what he must have thought was a hilarious joke by referring to her as “Boobs on the ground.” Bolling not only insulted the courageous pilot, but his associates at Fox News as well. He later apologized to his wife and Fox viewers, but egregiously left out the pilot and all other women in the armed services.

The “Flakes On A Plane” Award

Allen West, a disgraced veteran and one-term Tea Party congressman, supplied Fox News with an “exclusive” report about what really happened on the ground in Benghazi. West’s source for his exclusive was an anonymous stranger that happened to be sitting next to him on a plane who said that he knew some other anonymous dude who had the real skinny on the scandal. This is what passes for an “exclusive” news report on Fox News? A third-hand tale of conspiracy theories and previously debunked allegations?

As special salute at the conclusion of a year of monumentally asinine behavior, News Corpse is presenting its first “Dumfux Award for Achievements in Stupidy.” Candidates for this honor were many and included Ben Carson, Elizabeth Hasselbeck, Rush Limbaugh, and Keith Ablow. Sarah Palin was eliminated from the competition because her inclusion would have swamped the field. But emerging from the pack was a wholly deserving moron who proved himself through a year of failure and foolishness. So without further ado, here is the 2014 Dumfux Award for Achievements in Stupidity winner: 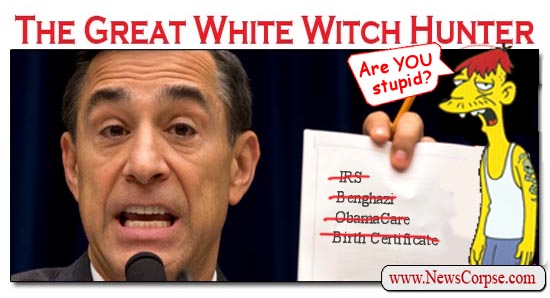 Rep. Issa chaired the House Oversight Committee through a maze of fake scandals, including Benghazi, the IRS/Tea Party affair, and ObamaCare. And in none of his persecutions did he manage to prove any of his preconceived allegations. But he sealed his victory for this award on the last day of the last hearing that he will attend as chairman. Having subpoenaed Jonathan Gruber, the economic advisor who inartfully described the American People as stupid, Issa must have believed that he was in a position to embarrass Gruber and, by association, all Democrats and supporters of ObamaCare. But Issa led off his inquisition with this idiotic question:

“Mr. Gruber, I’ve been accused that I’m going to berate you or something and I hope that you won’t feel that way when I get done. But the night before last I was at the Kennedy Center Honors where they honored Tom Hanks, famously ‘Forrest Gump,’ the ultimate in successful stupid man. Are you stupid?”

Gee…I wonder where Issa might have gotten the impression that people thought he would berate Gruber? This may be the single stupidest question Issa has ever asked anyone. What did he expect Gruber to say? And how did he think this line of questioning would benefit whatever investigation he was pretending to conduct? As usual, Issa’s motives were purely hostile and aimed at creating political theater. But by the end he once again demonstrated his impotence as even conservative colleagues and pundits criticized him for scheduling the pointless hearing in the first place. So congratulations Mr. Issa, and best wishes for a new year as a flunky who no one respects.