The Republican News Network (aka Fox News) is taking a hard turn away from domestic issues in advance of the 2016 election cycle. For the past several years Fox and the rest of the Right-Wing Media Circus has focused heavily on matters that hit close to home like the economy, unemployment, immigration, marriage equality, education, and relentlessly, healthcare – or more accurately, opposition to it.

Unfortunately for the GOP, every one of those issues has been trending favorably for the Obama administration and the Democratic Party. The economy has grown by historic rates. The stock market has hit record highs. The deficit has declined by two-thirds. Unemployment dropped from 10.1 to 5.7 percent and wages are beginning to rise. The majority of the public support the President’s positions on immigration. Marriage equality is being affirmed by courts across the country. Both academic and financial education reforms proposed by Obama are hugely popular. And ObamaCare reached new plateaus of success signing up more than 11 million new people this year. 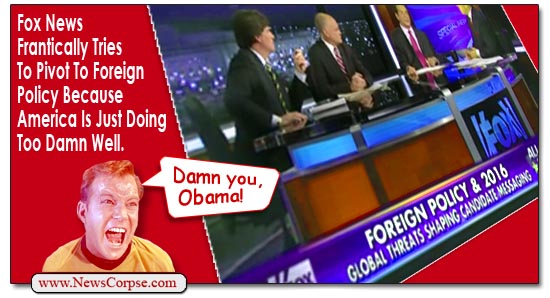 Also influencing the right is a Gallup poll released this week showing that terrorism has jumped in importance to the electorate. Fox News immediately began promoting this poll as evidence that Americans are convulsed with worry about being blown up in a cafe on Main Street. What they don’t mention is that terrorism in the poll shot up to a mere 8% and is still in fifth place behind four domestic issues. Also not mentioned is that another Gallup poll released the same day shows the President’s standing is on the rise. The poll shows him making significant gains with independents and even Republicans. And those gains are seen both personally and for his stance on issues.

So what is an obsessively hostile cable TV “news” network with a mission to promote conservative policies and Republican candidates to do? Of course, they have to pivot to foreign policy in a desperate bid to find a narrative that will advance their political goals. That is what’s happening now as this exchange from Fox News yesterday demonstrates:

Charles Krauthammer: This is going to be be one of those rare presidential runs in which foreign affairs is one of the dominant issues […] That is a very ripe field for the Republicans.
Ron Fournier: Charles is right. This is going to be a foreign policy election. I think that’s going to be really tough for Hillary given her last job.

Huh? Fournier didn’t elaborate on why Hillary Clinton’s last job as Secretary of State would make things harder for her if foreign policy were to take precedence. Running the State Department for four years would ordinarily be seen as a prime resume enhancement in an environment that prized international experience. Presumably the right is hankering for an opportunity to beat the Benghazi drum some more, but since they have failed to produce any evidence of wrongdoing after three years and dozens of investigations (including findings that exonerate Clinton and Obama by the GOP led House Intelligence Committee), it seems rather far-fetched that they can make an issue of it now. And when the election heats up Clinton will have a strong record of achievement about which to brag.

More to the point, the effort by Fox to divert attention away from the positive domestic news is bound to fail for three reasons. First, whatever plausible case they have to make against Obama and/or Clinton on foreign policy, they aren’t making it. Instead, they are wasting breath on such ludicrous trivialities as whether or not the word “Islamic” is appended to every mention of terrorism. Their mantra on this is that you have to “call it what it is” in order to win. They seem to believe that just changing the rhetoric all by itself would cause the bad guys to throw in the towel. That, of course, is absurd. The truth is that tarring all Muslims with an association to terrorism would only alienate the Islamic allies we need to prevail. The only parties who insist on this language are GOP/Fox News conservatives and the terrorists themselves. So why is Fox taking their side? That’s a question that Fox News will answer by shouting as loudly as possible, “Benghazi!”

The second reason that latching unto a foreign affairs campaign theme would fail is that, in addition to not making a negative case against Clinton, Republicans are also not making an affirmative case for themselves. Their fierce condemnations of Obama as being weak and incompetent (besides being somewhat unpatriotic by their own definition) imply that their alternative would be to recklessly leap back into a war footing around the world with fronts ranging from Iraq to Iran to Syria to Afghanistan to Ukraine, and even to Russia and North Korea. That would be a hard sell to the American people. What’s more, Republicans are already leaning on the same people that so profoundly wrecked the nation’s international relations as the would-be architects of the next GOP administration’s foreign policy.

Finally, after failing to make a foreign policy case against Clinton or for themselves, Fox and the GOP are forgetting the universal truth about presidential campaigns. As immortalized by James Carville, “It’s the economy, stupid.” No matter how much the right wants to avoid the domestic progress the nation has made in the years since George W. Bush and his cronies cratered the economy, that will always be the primary driver in voting for a national leader. And on that subject Republicans have nothing but failure to point to, while Democrats under Obama have an increasingly prosperous country and an agenda advocating on behalf of the middle-class. In addition, Clinton happens to be married to the last president to balance the budget while producing strong economic growth and job creation.

It’s no wonder that Republicans don’t want to run on domestic issues. And as their PR division, Fox News is valiantly striving to help them to change the subject. But no matter how hard they pray their wishes will not be realized. 2016 will be decided by an economic debate, just like every other presidential election. That fact, however, won’t deter the right from trying to elevate foreign policy because it’s all they have. And in a presidential election year, when turnout is higher, demographics favor Democrats, and the GOP has more at-risk seats than their foes, the outlook for Republicans is filled with the gloom that they have been trying to project on Democrats ever since the black guy moved into the White House.