The debate over climate change is over. Not only is it occurring, it is man-made and dangerous. That is not one person’s opinion. It is the consensus opinion of thousands of climate scientists who have studied and written on the subject. The evidence was published in a study led by John Cook of the Global Change Institute at the University of Queensland, Australia, that examined nearly 12,000 peer-reviewed papers that were categorized by both independent researchers and the paper’s own authors. The result: “97% of those expressing a position…endorsed the consensus position that humans are causing global warming.”

Notwithstanding the overwhelming evidence of the expert’s opinions, conservatives and right-wing media continue to try to dismiss reality in favor of a viewpoint that benefits the giant fossil fuel industry and defenders of the status quo. Leading the pack is Fox News where climate change denialism is clutched unto as a matter of faith. The twisted coverage of environmental issues by Fox News, and the rest of Rupert Murdoch’s media empire, has actually resulted in the countries where his media dominates (particularly the U.S.) to be the most ignorant of the risks associated with climate change. 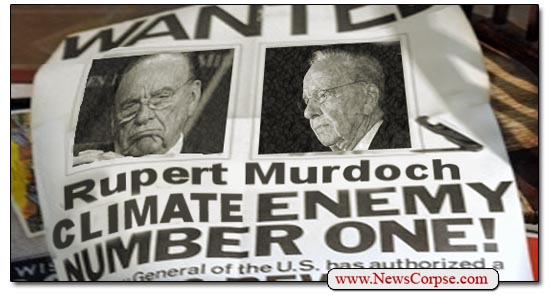 In keeping with their pro-pollution doctrine, Fox News published an editorial disputing a tweet by President Obama citing the 97% consensus.

The article was written by Richard Tol, a Dutch professor who has turned his denialism into a fetish. So much so that even after he was embarrassed by a prior effort to criticize the consensus he is still using the same failed arguments in this new article. Tol makes several wholly unsupported allegations against the consensus study, but focused on his assertion that the papers reviewed in the study were categorized improperly. He complains that…

Tol is overstating the process that actually consisted of only two reviews – an initial review followed by a re-review if the two researchers disagreed on a category designation. If they still disagreed after the second review, a third researcher would break the tie. There is no evidence, or incentive, for anyone conspiring to falsify the categorization. Even so, the gist of Tol’s complaint is that the study was just too darn thorough. That’s a negative in Tol’s view. Although real scientists tend to prefer thoroughness, shills and propagandists favor Tol’s disdain for it.

Additionally, Tol attempts to misrepresent the study’s findings by saying that of the 12,000 papers reviewed only 64 explicitly endorsed the climate change consensus. He exuberantly declares that that is only “half a per cent or less of the total, rather than 97 percent.” However, the study’s category for endorsement consists of three sub-categories including a range from explicit to implicit endorsement. Tol separated out just the papers with the highest level of explicit endorsement which was indeed 64. But he left out the other 3,832 papers that were also unambiguously endorsements. That’s the kind of math distortion that deniers embrace to make their illogical arguments seem reasonable.

A year ago, Tol tried to to make many of these same arguments to discredit the consensus study. He was roundly trounced in an article for the Guardian (a must read) by one of the study’s contributing authors, Dana Nuccitelli, an environmental scientist and risk assessor. In fact, Tol’s effort inadvertently confirmed the consensus study. Among the false claims that Tol made previously (and in his new article for Fox) was that Cook did not disclose the data used in the study. He must have overlooked the data that was fully published on a website where any interested party could make their own categorical assessments and compare them to those in the study.

Nuccitelli pointed out that using Tol’s methodology, which Tol himself miscalculated, resulted in an even stronger consensus, raising the figure from 97.1% to 97.2. Nuccitelli also revealed that Tol had tried to get his rebuttal theory published by the same journal that published Cook’s study, but he was rejected – twice.

In some sense you have to admire the tenacity of someone who can persevere despite being embarrassed repeatedly. But since this subject has such important ramifications for the planet and all of humankind, it is hard to have much respect for Tol, who perseveres in an effort to deceive people and advance the interests of those who would profit from the misery they create. No wonder this tripe was published by Fox News, whose own reputation is in tatters and for which there is also widespread consensus – of deception.