Anyone who watches Fox News for more than a few minutes quickly becomes aware that the network has a severe case of schizophrenia. They spend about half their airtime fawning over patriotic symbolism and pretending to embrace a near perverse love of country that borders on obsession. America probably wouldn’t have any trouble getting a judge to issue a restraining order to keep Fox stalkers away.

The other half of their airtime is consumed by the sheer hatred of everything about America today. They hate the President and the Congress. They hate school lunch programs and Social Security. They hate any effort to provide its citizens with healthcare or education. They even have a love/hate relationship with the military: They love invasions of foreign countries, but they hate training exercises in the southwest.

So when it comes to expressing pride in America, Fox News has to resort to making up stories that reflect their patriopathic fetishism. Case in point is a segment that aired this morning on Fox & Friends. 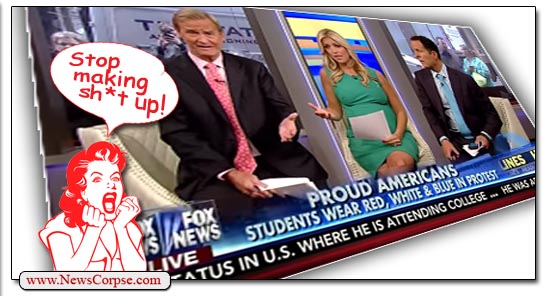 The “Curvy Couch Potatoes” got wind of an appalling insult to America’s ego by some academic apparatchiks at Jackson Hole High School in Wyoming. The story first appeared on the Fox Nation website and was attributed to the Daily Caller (which is run by weekend Fox & Friends host Tucker Carlson). Here is what Fox reported (video below):

Heather Nauert: Proud to be an American. The teenagers refusing to stay silent after their principal canceled America Pride Day. They canceled it over fears it would make other students feel sad or left out. Instead of going with the principal’s plan, the students decked themselves out in red, white and blue in protest.

Imagine that! What kind of high school principal would cancel America Pride Day? The outrage on Fox continued as co-hosts Steve Doocy and Ainsley Earhardt read emails to Fox that castigated the school officials “who want to impose their personal agendas on students,” so that in the future “we will not recognize America.” To which Earhardt added “That’s scary. […] It’s ridiculous. If you don’t want to be here…”

Yeah! Just get out of here you un-American children. The only problem with this tale of America shaming is that none of it is true. The school officials did not cancel America Pride Day, the students did. There was a survey taken to ascertain what themes the students preferred for their upcoming homecoming week. As reported by the Jackson Hole High School News…

“A piece of the homecoming planning included JHHS student council representatives creating a Spirit Day school wide student survey, which was approved by the JHHS administration. This provided all students an opportunity to weigh in and engage in the democratic process of determining how to celebrate each day. This process included the voices of many of our students as opposed to just the opinions of JHHS student council leaders or JHHS administrators only, as had been past practice.

With regard to the naming of America Day, the JHHS report noted that…

“America Day had many personal student comments about why that day was uncomfortable for some students. In an effort to compromise on the title of a day, and to meet district goals, a conversation with JHHS student council leaders and JHHS administration discussed alternative ways to name the day ‘Patriot Day’ or ‘Heritage Day’ to be inclusive. Both of these days were declined by JHHS Student Council leaders.”

So contrary to Fox News, there was no imposition of personal agendas by school officials on hapless students. The entire series of events was driven by the students themselves. And to the students’ credit, they were striving to be inclusive and sensitive to their fellow students. It seems that they should be commended for that rather than becoming the subjects of falsified reporting that frames the story derogatorily.

The JHHS report also made specific mention of the fact that “on any given day, students are welcome to celebrate their national pride and heritage,” and that “we support the pride of our country and those that have faithfully served so these democratic principles can be expressed.” And that’s exactly the way it should be. Too bad Fox News has to come along and smear their school and their community with lies aimed at dividing people and manufacturing hostility. The good people of Jackson Hole don’t deserve that and, fortunately, they are strong enough to transcend it.