The Republican Party has saddled itself with one of history’s most repulsive characters in this, or any, election season. Donald Trump is the manifestation of the racism, xenophobia, misogyny, and general anti-intellectualism that has long festered behind a thin veil of the GOP’s pseudo-respectability. As much as many of the party’s relative moderates are embarrassed by Trump, they cannot absolve themselves of responsibility for him. 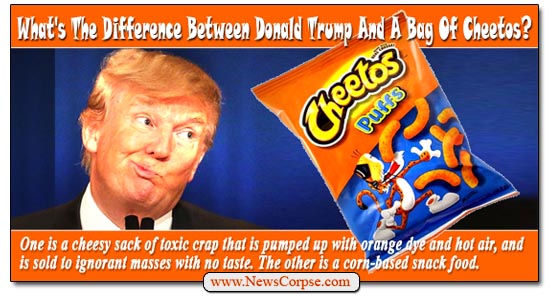 Trump’s campaign strategy has resembled nothing more than the sort of reality TV battles that made him a household name. He trades in hyperbole and personal attacks and dumbed-down misrepresentations of issues. More often than not he lies without shame to advance his self-serving interests (see the Trump Bullshitopedia) And always, he casts himself as a sort of Messianic savior who is the only hope for rescuing America from the hordes of enemies, within and without, who yearn to destroy us in unspeakably horrific ways.

However, if you pay attention to Trump’s own descriptions of his operational tactics you will find that he is selling himself more like a consumer product than a candidate. Trump is essentially marketing himself like the corny, air-puffed, cheese snack, Cheetos, which has little substance but lots of toxic chemicals and seasoning. And while the comparison has been made before, Trump is surpassing all previous efforts by confessing to his marketing schemes. He is slapping a label on his snake oil that actually says “Snake Oil.”

What follows are some of the comments that expose Trump as a smarmy salesman. And the fact that he is unashamed to admit that his entire candidacy is akin to a pitch for fast food makes it all the more distasteful.

The best place to start is where Trump helpfully defines the marketing premise of his campaign by telling Politico that “I’ve done my job. I’m the product, the product is me.” That was his attempt to explain why he relied on massive rallies to promote himself, rather than the face-to-face town hall gatherings that are the standard in early state primaries. It’s the marketing equivalent of putting up a Superbowl ad instead of having a taste test at a local grocery store. Trump doesn’t really want anyone to get that close for fear of being exposed as a phony.

Way back in 2006 Trump was on the O’Reilly Factor where he laid out for Bill O’Reilly the reason he fights dirty saying that “If I attack on a purely intellectual basis nobody would listen and the response would not be nearly as effective.” So he is admitting that his rancor and bombast is an act designed to bring him more attention. It doesn’t matter if it’s truthful or tactful so long as it has shock value and the media laps it up.

Then there was the time that Trump openly admitted that his antics were crafted to generate drama and controversy: “If I weren’t in the race you’d have the same as you did four years ago, just the same boring things that would be just boring, that’s the way it is. Maybe That’s why The Apprentice was so successful.” In this comment Trump actually openly associates his success as a candidate with success as a contestant on a TV game show.

That shouldn’t surprise anyone after they learn that his measure of power in politics is the same as his measure of power in television: “It’s ratings. I go on one of these shows and the ratings double. They triple. And that gives you power. It’s not the polls. It’s the ratings.” And furthermore, he believes that that capacity for drawing an audience (which rests primarily on appealing to their bloodlust for seeing a horrible train wreck live on the air) puts the TV networks in his debt: “The networks are making a fortune off of me!” Sadly, the networks are buying into that as recently revealed by Les Moonves, the CEO of CBS who said “Who would have thought that this circus would come to town. It may not be good for America, but it’s damn good for CBS. […] Go Donald, go.”

Which brings us to how Trump extends his marketing philosophy to his opponents. He has coined little slogans to disparage other candidates, or anyone whom he regards as an enemy. For instance, “Lyin’ Ted” Cruz and “Little Marco” Rubio. He has also tried to stick labels on Ben Carson as a “psychopath,” Jeb Bush as “low energy,” and Hillary Clinton as “lacking stamina.” What all of these have in common is their resemblance to marketing catch phrases that he repeats every time he mentions their names.

Donald Trump is bound and determined to create a public perception of his rivals as evildoers who strive intentionally to cause harm to America and its good citizens. At the same time he offers himself up as the solution to every problem anyone could ever have. His self-branding positions him as the best at whatever he is currently talking about: building a wall, killing terrorists, creating jobs, curing disease, etc. He is likewise the bestest of friends to the poor, women, veterans, evangelicals, and “the blacks.” In short, he’s an all-purpose elixir to cure whatever ails ya.

This characterization of himself serves the purpose of certifying his role as savior to the ignoramuses who worship him no matter what disgusting thing he says or does. It’s a phenomenon that even the obsequious media has recognized. Trump’s support seems to congeal following some grotesquery like a blatant lie (thousands of Muslims celebrating 9/11), or brazen misogyny (blood coming out of Megyn Kelly’s, whatever), or embrace of hatred (declining to rebuke KKK support), or advocacy of violence (promising to pay the legal fees of supporters who assault protesters).

These are not coincidental factors in his campaign. Trump is deliberately setting up his followers to behave like the zombie fanatics for which he desperately yearns. They are expected to follow him into literal battles as exemplified by his threat of riots at the GOP convention if he is not crowned as the Party’s nominee. His egomaniacal compulsions are typical of a cult leader who requires total devotion from an unquestioning flock. And he is as open about that aspiration as he is about his crass commercialization of politics. He regards his supporters as disciples who will follow him anywhere, as he revealed in this tweet:

“Because of me, the Republican Party has taken in millions of new voters, a record. If they are not careful, they will all leave. Sad!”

And just to reiterate the point, he told Joe Scarborough on MSNBC that “If I go, I will tell you, these millions of people that joined, they’re all coming with me.”

And so the Tribe of Trump is born. And in order to belong you must literally pledge your allegiance. This is a bit more demanding than becoming a part of the Pepsi Generation, but is sold in much the same way – through sloganeering, repetition, and the packaging of a social sect that promises acceptance and the welcoming embrace of a de facto family. Even if it is more like the Manson Family, it still offers a measure of warmth and communion. It is a shield from the tribulations of a world they perceive as hostile with enemies everywhere, including where they used to find friends.

In that regard they have even joined Trump’s war against the most reliably biased right-wing media empire in history, Fox News. Trump’s war on Fox has been joined by his minions who are all too happy to boycott the network to which they once clung obsessively. And Trump eggs them on tweeting “Wow, you are all correct about @FoxNews – totally biased and disgusting reporting.” So what we have here is the Trump Cult competing directly with the Fox News Cult. This should be fun.

Trump has adopted a mix of missionary work and marketing that exploits the tried and true methods of televangelists and telemarketers (but I repeat myself). He employs the persuasion technology of modern media to appeal to people’s fear and dependency on a sense of belonging (i.e. white supremacy). And his methods include the emotional power of proselytizing patriotism, faith, and rampant scapegoating of vulnerable minorities. It’s a potent cocktail that approaches a form of mass hypnosis, and it has been used before on frightened and disaffected populations. Which makes it all the more understandable that, by his own admission, Trump is not bothered by comparisons to Hitler. In fact, Trump probably views him as an inspiration and role model.

4 thoughts on “In His Own Words: Donald Trump Is Selling Himself Like A Bag Of Cheetos”