The week-long Republican National Convention is over and what most people will remember from it is that Melania Trump is plagiarist and that Donald Trump thinks the America is in the grip of a dystopian nightmare. There is little evidence that the typical polling bump that these events generally produce will occur. That is in large part due to the fact that depressing harangues intended to frighten voters are more likely to alienate than inspire. That’s why Ronald Reagan’s campaign slogan was “Morning in America” and not “Mourning in America.”

Consequently, Fox News has had to scramble to manufacture anti-Democratic plot lines in advance of the Democrat’s convention this coming week. So far they have latched onto the story about the hacked DNC emails implicating the party in efforts to undermine the Bernie Sanders campaign. It’s rather humorous to see Fox, and their roster of right-wingers, feigning concern for the unfairness shown to Bernie – as if they care.

In the absence of any other news with which to malign the Democrats, Fox News began running a story that they got from their sister publication, the New York Post. It is a trivial bit of tabloid gossip that Fox is elevating to scandal status via brazenly misleading promos. The phony Fox headline is “Obama Endorses Trump.” 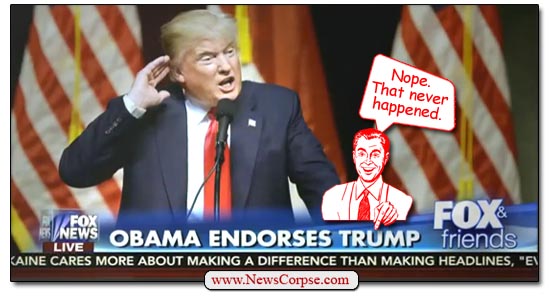 Any of the poor saps who were watching this story unfold on Fox & Friends discovered after the commercial break that the Obama referenced in the promo was not President Barack Obama, but his brother, Malik. Why this would be of interest to anyone is a mystery. The Obama brothers have not been close for many years and Malik has made a career out of exploiting his family ties and denigrating the President. Nevertheless, Fox found this to be a significant development and ran the story several times throughout the day.

What Fox failed to mention were the reasons that Malik gave for favoring Trump. The article in the Post says that Malik was “annoyed that Clinton and President Obama killed Libyan leader Moammar Khadafy, whom he called one of his best friends,” and that “what bothers him even more is the Democratic Party’s support of same-sex marriage.” The Post quoted Malik as saying that “I feel like a Republican now because they don’t stand for same-sex marriage, and that appeals to me,”

Malik Obama is such a strong advocate of “traditional” marriage that he has entered into it at least three times (and as many as twelve, by some reports). And unlike Trump, whose three marriages were consecutive, Malik’s are concurrent (i.e. he’s still married to all of them).

The Post also reported another part of Malik’s past wherein he created a dubious charity that ran afoul of the law, noting that it was “an off-the-books operation that hadn’t registered with the state of Virginia or, as it claimed, had tax-exempt status from the IRS.”

No wonder Malik Obama is a big fan of Donald Trump (And Trump is a fan of Malik too). They both collect wives for a hobby (and on top of that Trump is a serial adulterer who wants to bang his daughter). They both oppose marriage equality (although Trump has been known to swing both ways – on the issue, that is). They both admire brutal dictators (Trump has been known to praise Vladimir Putin, Kim Jong-Un, and others). And they both make up charities that end up being exposed as self-serving scams.

The “Curvy Couch” potatoes of Fox & Friends never mentioned any of those things as they struggled to find relevance in this pathetic story. The only takeaway from this that has any import is that Malik Obama and Donald Trump were cast from the same loathsome mold. Other than that, this ludicrous story has no bearing on President Obama, Hillary Clinton, or the election. It is more a reflection on Trump and Fox News than anything else.