The third and final presidential debate between Donald Trump and Hillary Clinton is now history and that’s precisely the place it will reside. Never before has a candidate outright refused to respect the will of the voters. However, Trump is not an ordinary candidate. From the outset of his campaign he’s taken every opportunity to express disrespect for American principles and for his opponents. And that was true during the Republican primary as well as the general election. 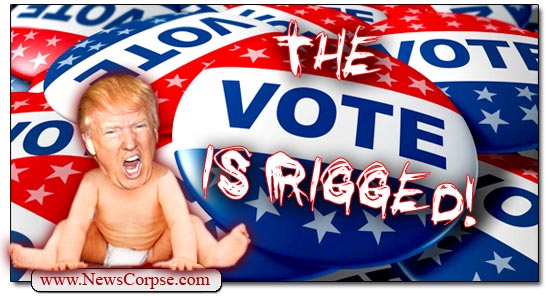 There were many times during the debate that Trump embarrassed himself. He blatantly lied about his prior support for countries like Japan, South Korea, and Saudi Arabia, to acquire nuclear weapons. He defended Russia against charges that they hacked American citizens and institutions. And he denied insulting the women he’s accused of assaulting even though videotape exists to prove it. Trump even blamed Clinton for his failure to pay federal income taxes for nearly two decades.

But the most disturbing thing Trump said last night was that he was unwilling to accept the results of the election if he loses. His baseless assertion that the system is “rigged” against him is typical of his paranoid, narcissistic approach everything. His specific complaints were a cacophony of incoherence. Beginning with this:

“I’ll look at it at the time. What I’ve seen, what I’ve seen, is so bad. First of all, the media is so dishonest and so corrupt and the pile on is so amazing. The New York Times actually wrote an article about it, but they don’t even care. It is so dishonest, and they have poisoned the minds of the voters.”

Even if the media were biased against him, that would not equate to voter fraud or make the election invalid. And he praises the New York Times in the same sentence that he criticizes it. Then he insults voters for allowing their minds to be poisoned, but only if they don’t vote for him. For the record, studies show that Trump received far more favorable coverage in the press than any other candidate.

Trump continued his anti-democratic rant with more blathering that is impossible to translate into human:

“Millions of people that are registered to vote that shouldn’t be registered to vote. So let me just give you one other thing. I talk about the corrupt media. I talk about the millions of people. I’ll tell you one other thing. She shouldn’t be allowed to run. It’s … She’s guilty of a very, very serious crime. She should not be allowed to run, and just in that respect I say it’s rigged.”

First of all, the millions of people he’s referring to appear to be names that appear on registration rolls that may not be updated for deaths or relocations. Of course, there is zero evidence that anyone in those circumstances ever voter improperly. But what “serious crime” Trump has in mind is never mentioned. And in any case, he is not the arbiter of who is permitted to run for office. The Constitution doesn’t prohibit even felons from running. He is simply demonstrating his affinity for tyrannical rule. Just as he did when he promised to investigate and incarcerate Clinton if he should become president.

Debate moderator Chris Wallace of Fox News reminded Trump that his refusal to accept the election results contradicted pretty much everyone in own sphere of influence. Reince Priebus, the Republican Party chair, insisted that the election results should be respected. So did his campaign manager Kellyanne Conway, his running mate Mike Pence, and his daughter, Ivanka. Nevertheless, Trump himself veered off to say only that “I will tell you at the time. I’ll keep you in suspense, OK?” He still seems to think this a reality TV game show.

For her part, Clinton was appropriately appalled. She interjected to say “let me respond to that because that’s horrifying.” Continuing she said:

“This is a mind-set. This is how Donald thinks, and it’s funny, but it’s also really troubling. That is not the way our democracy works. We’ve been around for 240 years. We’ve had free and fair elections. We’ve accepted the outcomes when we may not have liked them. And that is what must be expected of anyone standing on a debate stage during a general election.”

Exactly. That is how an adult behaves in a democracy. It’s a question of valuing the principles and traditions that define a free people. And it isn’t an act of partisanship. When you have people like GOP strategist Steve Schmidt saying Trump’s remarks are “a disqualifying moment,” and Fox analyst Charles Krauthammer calling it “political suicide,” it’s safe to say that party affiliation is not involved.

What Trump has done is to plant the seeds of doubt in the minds of his gullible followers. He is saying that American elections are untrustworthy and not to be respected. That’s a recipe for chaos and it encourages the most demented malcontents to take matters into their own warped hands. If Donald Trump had an ounce of patriotism he would immediately reverse course and pledge to honor the election. But knowing him that would be way too much to expect.