Before I write a single word on the subject in the title of this article, I want to acknowledge that it is an extremely unlikely proposition. So anyone hankering to post frantic accusations of deranged liberals in denial, STFU. I know. That said, this deserves support purely from a conceptual perspective. It puts a focus on the legitimate reasons that Donald Trump’s election is an aberration of democracy. At the same time, it exposes the anachronistic nature of the Electoral College whose time was over long ago. And in the unlikely event that this notion should gain steam and become plausible, so much the better. 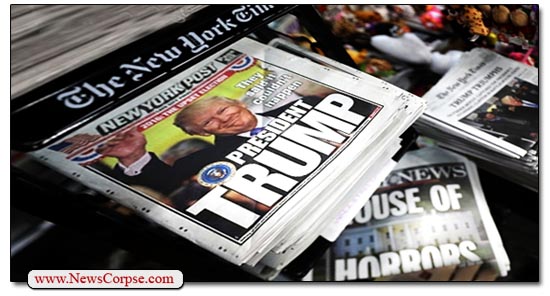 The election of Donald Trump has caused a tsunami of critical analysis, most of which revolves around the shock that it occurred at all. Trump was opposed by an unusually broad array of Americans, including Republicans, national security experts, economists, and more. His utter unpreparedness for the job wasn’t sufficient to dissuade voters from choosing him over a far better qualified woman. In fact, Hillary Clinton’s experience was portrayed as a flaw. Because who wants experience in the most powerful leader in the world?

The day following the election, citizens across the country took to the streets to protest Trump’s victory. It was a spectacle unseen since the protest marches for civil rights or against the Vietnam war. Clearly there is a significant faction in the nation that is looking for a way out. And there just might be one.

There is nothing in the Constitution that binds members of the Electoral College to vote for any particular candidate. Some states have laws that impose a fine if the Elector doesn’t vote for the candidate who won the state, but those rogue votes are still counted. Consequently, Electors could still vote for Clinton when they meet on December 19, and she would then become the president-elect. And since Trump won with a bare majority of 279 Electoral College votes, only ten Electors would have to switch.

The Arguments For Electoral Vote Swapping:

Changing a vote in the Electoral College ought not to be done lightly. It should require thoughtful consideration and persuasive reasoning. Here is a summary of what might justify this radical step:

These are serious arguments that could justify an Elector (or ten) voting against Trump. Taking an action like this would be an extreme measure reserved for only serious threats. But if anyone represents a clear and present danger to the United States, it’s Donald Trump. And there are many citizens who are worried about the prospect of his assuming residence in the White House. To that end they have started a petition directed to the Electoral College. It currently has over 1,000,000 2,300,000 3,500,000 signatures (and rising fast) and poignantly asks “Why not use this most undemocratic of our institutions to ensure a democratic result?”

That’s a good question. Feel free to sign the petition. No matter how long a shot this is, it’s still a good way for citizens to express their disgust and refusal to submit to the horror of a Trump presidency. Progressives are now the loyal resistance, and they should act like it.