In the past twenty-four hours congressional Republicans have given the nation a taste of the callous disregard they have for ethical conduct. On Monday it was reported that Republicans voted to neuter Congress’ ability to investigate misconduct in their ranks. They adopted a proposal to close the bipartisan Office of Congressional Ethics. Their plan called for replacing it with a panel comprised of members of the GOP-dominated Oversight Committee. 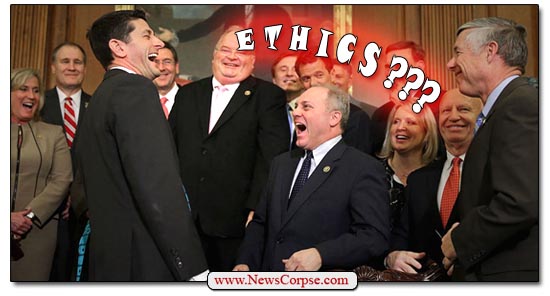 Almost immediately this proposal was lambasted by both parties and pundits from across the political spectrum. It was seen as an attempt to protect themselves from scrutiny and punishment for malfeasance in office. Even Donald Trump weighed in via Twitter saying that:

“With all that Congress has to work on, do they really have to make the weakening of the Independent Ethics Watchdog, as unfair as it […] may be, their number one act and priority. Focus on tax reform, healthcare and so many other things of far greater importance! #DTS”

Trump’s vague expression of disapproval perfectly illustrates the problem with the Republican’s lack of principle. Notice that he did not criticize the proposal’s intention, only its timing. In fact, he endorsed the baseless complaint that the current system is “unfair.” And that’s precisely what the GOP has believed ever since the office was created by a Democratic congress in 2008.

On Tuesday morning, the Republican’s anti-ethics proposal was put back on the shelf. It was a head-spinning reversal that made clear how terribly they had screwed up. This was the party that promised to “drain the swamp” in Washington, but instead was feeding the gators. Politico reported that:

“Following a public outcry, and criticism from President-elect Donald Trump, House Republicans reversed course Tuesday on drastic changes to the independent Office of Congressional Ethics. House Majority Leader Kevin McCarthy (R-Calif.) offered a motion to restore the current OCE rules, and that was accepted by the GOP conference.”

What was not reported is that there was ample precedent for what Republicans tried to do Monday. Just two weeks ago Newt Gingrich addressed the ethics issue, complaining that for Trump “traditional rules don’t work.” He described Trump’s ascension to power as a “billionaire presidency,” which he meant as a justification for special treatment. In other words, the rules for the rich are different than those for the rest of us.

Furthermore, it’s possible that the House GOP was reacting to something the federal Office of Government Ethics did in November. A series of tweets were posted that sarcastically praised Trump for divesting himself of his business interests. Which not only has he not done, but he stubbornly refuses to do so. He even canceled a scheduled press conference to explain how he would handle his copious conflicts of interest. By closing up its own ethics shop, House Republicans might just be hoping to prevent other such embarrassing exposes of their affinity for corruption.

So for the time being, the House Office of Congressional Ethics will continue to operate. However, expect this matter to return when they think they can slip it by without arousing suspicion and criticism. They still believe it is in their interest to suppress ethics inquiries. They just don’t want to get caught doing it at the outset of their party’s domination of government.