For several months Donald Trump has been dismissing reports that Russia interfered with the 2016 presidential campaign. He has had a variety of counter explanations for the documented cyberattacks. On some occasions he alleged that they were the work of China. On others he imagined that “somebody sitting on their bed that weighs 400 pounds” had concocted the whole scheme. 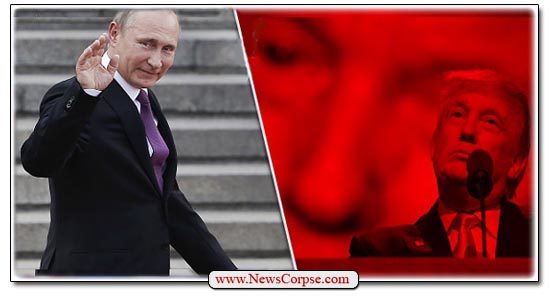 The only party that he never exclusively held responsible was the one that was indisputably guilty: Russia. Every relevant intelligence agency concluded that Russia was behind the attacks and that they were certain to strike again. Former heads of the CIA, FBI, NSA, etc., unequivocally fingered Russia as the only culprit. And yet Trump ignored the analysis of the intelligence professionals in favor of his pals at Fox and Friends. He labeled the entire episode a hoax contrived by Democrats who were bitter at having lost.

On Wednesday morning, however, Trump signed a bill to impose sanctions on Russia for their involvement in the election tampering. The bill covers several matters on foreign policy that Congress acted on due to Trump’s opposition and/or neglect. According to NBC News:

“The bill sanctions Russia — citing its cyberhacking as well as aggression in Ukraine and Syria — while also slapping new sanctions on North Korea and Iran. But the legislation also makes it harder for the president to lift these sanctions unilaterally, requiring permission from Congress before waiving them.”

In effect, Trump’s signature puts into law that he is a liar. It directly contradicts his stubborn refusal to accept reality about the nature of Russia’s offenses. What’s more, the bill overtly prohibits him from altering the terms of the sanctions. Congress was so worried that Trump would ignore their legislation that they legally tied his hands. It was a smart move on their part given Trump’s creepy affinity for Vladimir Putin and aversion to criticizing him.

The bill passed in the Senate by an overwhelming vote of 98-2. Similarly, in the house it passed 419-3. Consequently, Trump knew that there was a veto-proof majority in Congress that would have made the bill law whatever his response. If he vetoed, or declined to sign, the bill it would have become law anyway. But he would be perceived as having aided and abetted Putin’s attack on American democracy. However, by signing it he accepts the premise that Russia did interfere with the election and deserves to be punished.

That dilemma resulted in Trump attaching a signing statement to the bill to express his objections. But that only exacerbated the hypocrisy. Seven times he asserted that the bill’s provisions were “clearly unconstitutional.” How can a president, sworn to uphold the Constitution, sign a bill that he believes violates it? That, by itself, is a breach of his oath of office. By way an explanation, Trump issued a separate statement saying that:

“Despite its problems, I am signing this bill for the sake of national unity. It represents the will of the American people to see Russia take steps to improve relations with the United States.”

First of all, his notion of national unity is not a justification for violating the Constitution. And secondly, this bill does not represent America’s desire to improve relations with Russia. It represents the desire to penalize them for criminal activity. Trump must think that incarcerating Charles Manson was an attempt to get along with him better. It’s that sort of illogic that infects so much of Trump’s thinking. Including this closing thought in his statement:

“I built a truly great company worth many billions of dollars. That is a big part of the reason I was elected. As President, I can make far better deals with foreign countries than Congress.”

In fact, he built a company that suffered multiple bankruptcies, and whose value is unknowable because he refuses to release his tax returns. Trump’s prowess (or lack thereof) at deal making has been apparent in the first six months of his presidency that has produced zero achievements. And as for the reason he was elected, many people say it is was actually due to Russia’s interference. So there’s that.