Monday night Fox News will premiere a new primetime program featuring ultra-rightist pundit, and radio talker, Laura Ingraham. She is the latest in Fox’s schedule shake up resulting from the terminations of Bill O’Reilly and Eric Bolling. They were jettisoned after multiple allegations of sexual harassment and abuse. Fox News also lost Megyn Kelly, who quit in part due to harassment from O’Reilly and former CEO Roger Ailes. 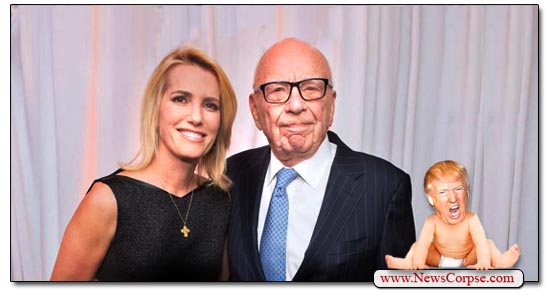 Fox News chairman Rupert Murdoch threw a party for Ingraham last week to celebrate the show’s pending debut. The guest list says a lot about what sort of program Ingraham will host, and about Fox News in general. On the Twenty-First Century Fox blog a post described the soiree saying:

So the President’s daughter, and senior advisor, showed up to celebrate with Ingraham. She was joined by a phalanx of exclusively Republican members of Congress. Some of whom are close allies of Trump and his administration. In addition, Senators Ted Cruz and Rand Paul were sighted at the exclusive affair. These are just the sort of people who will likely be guests on the program in the weeks ahead. That makes parties like these wholly inappropriate for anyone pretending to practice journalism. The chumminess of these politicians and the program hosts at Fox News destroys any pretense of independence. And the absence of any Democratic guests put to rest any notion that Ingraham’s show will be “fair and balanced” (a slogan that Fox has retired).

Of course, Fox News has never been known as an impartial player in the punditry business. The primetime lineup that Ingraham is joining also features Tucker Carlson and Sean Hannity. The three of them will be the most sycophantic flock of Trump fluffers ever assembled on television. It’s a three hour block of non-stop GOP propaganda and lies. They have all demonstrated a devotion to the President that borders on cult worship. Ingraham herself was briefly considered for a post in the administration as chief media basher and BS disseminator communications director.

It is, therefore, more accurate than ever to describe Fox News as State-Run TV. It’s purpose is to advance the conservative agenda and to defend Trump from any and all criticism. Ingraham has already announced that she will be interviewing Trump in the near future. That would make it his twentieth interview for Fox News. For perspective, the news entity next on that list is the New York Times with only four interviews. And if Ingraham’s sit down is anything like the others on Fox it will only be good for laugh. See this compilation of the network’s suck-ups: