Ever since the story broke about how Donald Trump is ripping children from the arms of their mothers and fathers, Fox News has been trying very hard to help the President obfuscate the issue. They have been variously claiming that it wasn’t happening, or it that it was happening before Trump, or that it was an act of mercy, or that it was horrible but the fault of Democrats. They have been so shaken by the public reaction that they can’t seem to pick a lie and stick to it. 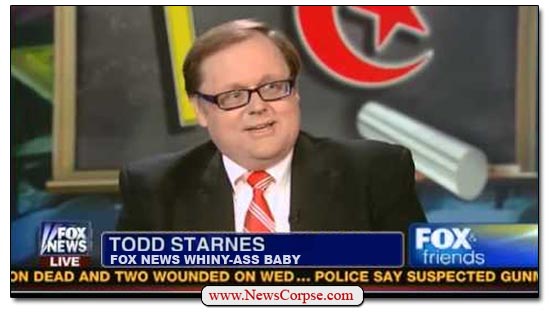 Now Todd Starnes of Fox News Radio has found a whole new approach to the matter. He’s delighted that he can defend Trump’s child abuse initiative by noting that the President isn’t gassing children. No, really. Here is what he said:

"President Trump is not gassing children": Todd Starnes defends the Trump administration's policy of separating families at the border by declaring that critics of the policy are treasonous traitors. pic.twitter.com/H7jnpZxmp6

When you have to sink to finding the goodness in your policies by being able to say they aren’t as bad as Nazi atrocities, you might want to rethink those policies. Unfortunately for Trump and the Republican Party, it’s too late for that. They are now married to this heinous practice after repeatedly sending out administration officials to defend it.

And Fox News may be the worst among them all. Their hosts from Fox and Friends in the morning, to Tucker Carlson, Laura Ingraham, and Sean Hannity at night, have all taken Trump’s side. They try to portray the detention centers as “summer camps” where kids are confined by “walls of chain-link fences” which, for some reason, are not cages. They claim the kids have regular meals, televisions, and play sports. That is, when these toddlers aren’t curled up in foil blankets, crying for their mothers.

And Starnes calls critics of this cruelty “treasonous” and “traitorous” based on his perception of them as siding with “illegal alien invaders.” That’s right. He sees these children as warriors from hostile nations, and anyone who has compassion for their suffering is betraying America.

For the past week there have been a lot of nauseating efforts to justify what the Trump administration is doing to these kids. But Starnes may have hit peak assholiness. At the same time he has rather succinctly summed up what Trump and the GOP have wrought. They are apparently aiming for a horrendous method of terrorizing children and deterring asylum seekers without quite reaching the depths of the Third Reich. Perhaps we should congratulate them on their success.