It was only about eight months ago that Donald Trump reached out to the disgraced former president of Fox News, Bill Shine, and asked him to take a White House position as Deputy Chief of Staff for Communications. While many found this appointment peculiar, it actually made perfect sense. After all, Both Trump and Shine were products of Fox News and were associated with predatory sexual harassment and abuse. 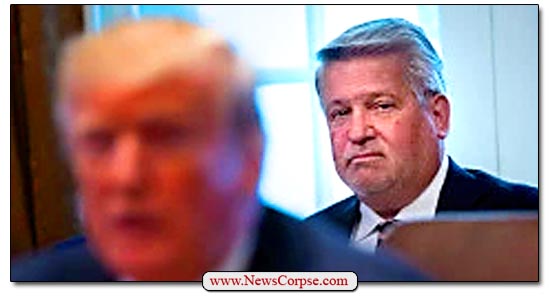 However, for some reason this marriage made in Hades didn’t work out, and Shine has now resigned amidst speculation that Trump was bitterly disappointed with his work. Apparently, Trump expected Shine to generate positive news for a president who does nothing but whine, insult others, and lie compulsively. In Shine’s defense, no one could turn that stink bomb into a sweet smelling bouquet. According insiders as reported by CNN:

“Shine’s effectiveness inside the West Wing came with mixed results and it was unclear how much he was able to change the White House’s communications strategy. One source close to the White House told CNN that Trump had questioned Shine’s judgment on a number of issues in recent months, from the midterm election to the government shutdown.”

Indeed, the midterm election resulted in an historic forty seat gain by Democrats in the the House of Representatives. And the Trump Shutdown brought him even more disrepute and scorn than he had previously earned for his repeated failures domestically and internationally. Shine’s bumbling tenure at the White House was notable for a number of short Twitter videos that resembled nothing more than the propaganda produced by the Information Ministries of third world tyrants. They always featured the President bragging about some project that flopped thanks to his absence of knowledge and leadership. Even Trump recognized the weakness of Shine’s efforts and leaned on them to avoid placing any blame on himself:

“Trump had been down on Shine for at least a few months, believing him ineffective and not what he’d hoped for when he hired him, according to people familiar. Shine’s role basically became the person who adjusted the lighting and focused the cameras, and he showed no ability to shape a narrative or communications strategy.”

Anyone at Fox News might have been able to warn Trump about Shine. Before he was abruptly terminated, his network colleagues viewed him as a hollow “yes man” to the late Roger Ailes. And when put in a leadership role at either Fox or the White House, he has proven that he was never more than a clueless loser who rose to prominence for having been Sean Hannity’s producer. And perhaps the only White House “achievement” that Shine can point to is an anti-free press decree governing the conduct of journalists.

Now that pathetic resume has resulted in Shine getting a new job with Trump’s 2020 reelection campaign. Even though he’s still technically on the Fox News payroll. Nevertheless, you have to wonder why someone who is being kicked out the door for ineptitude would still be relied on for such a critical task. But his position with the campaign will likely bring both relief and joy – to Democrats.

So now the communications post at the White House is once again vacant. Shine was the sixth person to fail at this job following Jason Miller, Sean Spicer, Mike Dubke, Hope Hicks, and famously Anthony Scaramucci, who lasted ten whole days before self-destructing. And the jockeying for a replacement will soon begin. Look for a another Fox News alum (Laura Ingraham?) to step up. They are practically the only people that Trump knows or trusts.